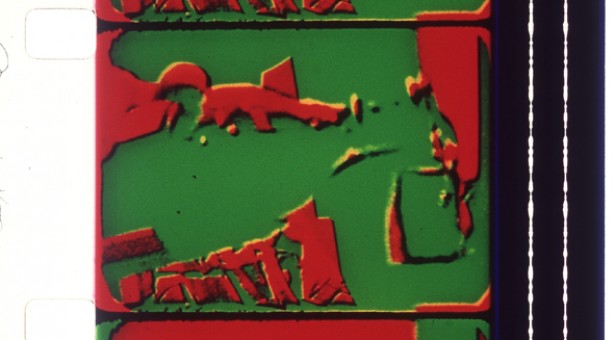 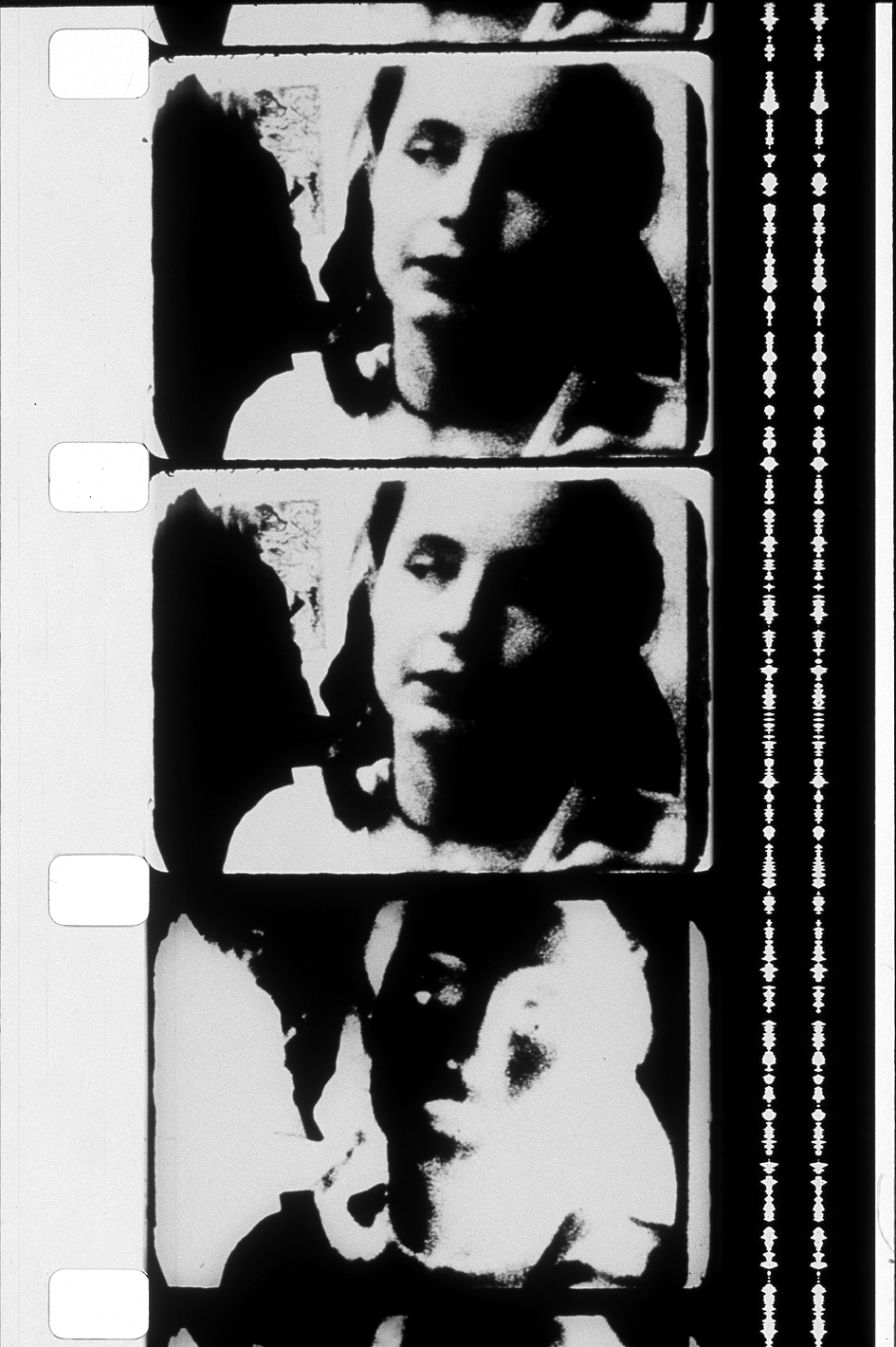 You can see part of it on-line, actually. In past films, I had played with four different approaches to filmmaking. One was animating still photographs that resemble each other. For example, I made a series of photos as I was moving down the street: if you would have flipped them like a flip book, you would perceive motion down the street. Then I filmed those photographs one by one, slowly at first, moving into them. You can see part of this film in my documentary [Free Radicals]. As you go into the photograph, it speeds up. It gets faster until I am switching photos frame by frame. At that point, the photographs become film frames, become cinema. I was interested in how the single frames in film are like photographs, but they are not photographs, and what is the status of a single frame. That’s one approach: animating single frames.

Another approach was cutting to music. I started with music from an old cartoon which I recorded onto magnetic track. Then I marked onto a parallel strip of film leader every beat or every sound in the music I wanted to do something with visually. Then I cut away pieces of this filmstrip, replacing the leader with shots, exactly following the music cues. This way the film lines up with the music in a funny way. That was another approach or idea.

A third was hand-developing, working with chemicals, because I was beginning to feel frustrated that the camera does everything. I am doing nothing. I am just pointing at something and the camera does all the work. Somehow I thought it could be more personal so I got interested in working with chemicals and hand-developing. I felt that by touching the material, by changing the combinations of chemicals and the temperature you could get something more personal. And I succeeded in making a short film that was very personal, that was kind of distorted visually, but had an imprint of my hands and my feelings. That was the third.

And the fourth was diary style, just shooting spontaneously, which I’d been doing since I was a kid with no script and no idea, just capturing life around me. I always have my camera with me and I am always shooting. Film diary.

So when I made this film, Charlemagne 2: Piltzer, I was trying to combine all these four things. I filmed Charlemagne Palestine’s concert in Paris, because he said: bring your friends, bring your camera. And so I filmed two rolls, diary style, without thinking, just shooting this and that… Then I forgot about these rolls of films and I didn’t even develop them for two years. But when I saw them, and it was hand-developed negative actually, I remembered I had recorded the music, so I thought I could make something in resonance with the music.

Charlemagne’s music starts as a structural idea − he plays intervals on the piano, alternating between two notes, getting faster and faster and faster so you do not hear melodies but harmonics. The two notes are in a relationship called a diminished fifth. It is not a perfect fifth, like the music you hear at the beginning of „2001,“ the dominant, fifth and octave. These notes make a very strong, powerful, major chord. No, Charlemagne plays a diminished fifth, which is discordant. And when you hear these notes together, they beat against each other. They make a beat frequency. They create a rich pattern of harmonics.

He plays a Viennese Bösendorfer piano which resonates very beautifully, and he plays these intervals very fast, and it fills the room with all these harmonics. He is not playing the melody, he is playing the harmonics. So I thought: I can use colors that also resonate like this, complementary colors that don’t blend, like red and green. There is no such color as reddish green, because in the brain, in the eye, cones in the retina are receptive to specific colors. And there is one cone for example, which is excited by red and inhibited by green. So it beats faster in the presence of red and slower in the presence of green – so it can’t do both at once. That’s why biologically there is no such color as reddish green. So if I flicker back and forth between red and green, very very fast, what do you see? I was curious what you would see. So I was trying to do for the eyes what Charlemagne does for the years. Also, you know how the octave makes a circle: Do-Re-Mi etc comes full circle back to Do. It’s like a wheel. But in fact it’s not at all a wheel, because below Do the frequencies get lower and above Re, higher. But the brain makes it into a kind of repeating wheel. And the same is true with color, because the rainbow colors – red, orange, yellow, green, blue, violet – come back to red. You have this idea of a color wheel. But it’s also not a wheel. Because physically, below red is infrared and above violet is ultraviolet. We can’t see them. So the brain connects the ends and makes this wheel.

And Charlemagne was using half the wheel, like if you have a C and G-flat.

In the color wheel it’s the same: red and green are on opposite sides. So I was trying to cut these circles in half and play with … I was just following his music. So I did the same thing as with that earlier film, where I took the soundtrack, magnetic tape, and I marked it up, every time he plays a note. Sometimes he plays very slow, sometimes very fast. And I printed the film frame by frame, following this score, and using complementary colors. So in the eye you get this very fast psychological effect, that works both on the retina and the occipital lobe in the brain where the visual information is processed and it creates a kind of perception which causes epilepsy in some people and it makes other people excited about filmmaking. (laughs)

In his concert, Charlemagne played 22 minutes. So my film is 22 minutes long. I had decided that every frame of my film should correspond to a note played on the piano, so I counted the notes. He plays 6923 notes. And in my film, on the two super-8 rolls there were about 6 980 frames. Every time he presses the piano, I advance one frame. Which relates to the first film I was talking about, the film with animated photographs. Every time he plays a note, I advance one frame. Sometimes it’s very slow and makes a series of still images, and sometimes it’s fast and makes a movie. So the film starts with stills, and then it gets faster and faster and faster, then you see people moving. So that’s the other idea that was in the film. 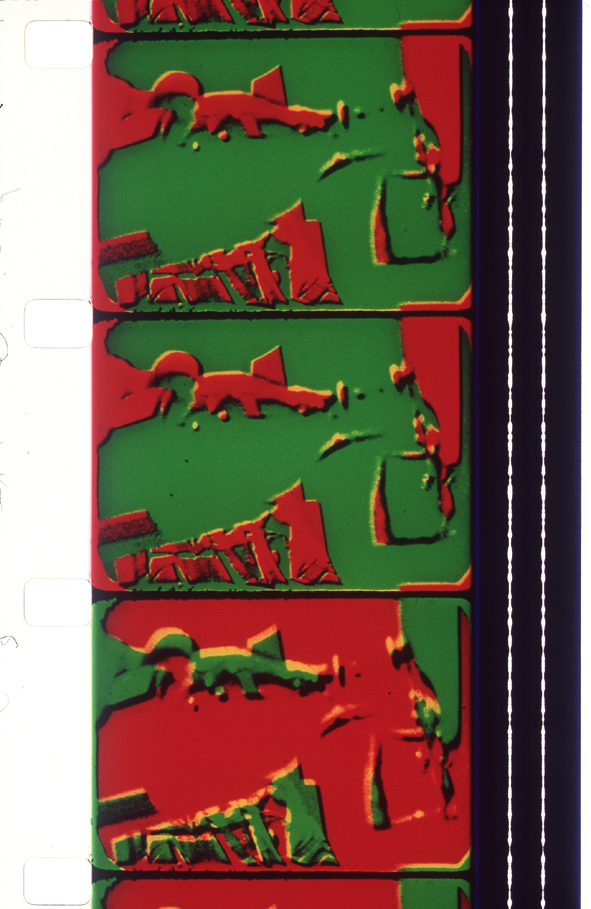 How about your ideas on the movie medium and on the ideal projection of films? We know Kubelka’s ideas about this, which came to my mind when I saw you yesterday before the showing of your movie (Free Radicals). You were disappointed, because you weren’t happy with the contrast…

Yeah, the blacks were grey, and there was a grey border around the picture!

But the film was evidently played from the DVD so…

No it was played from the high-definition ProRes file.

…so I guess you don’t have the same strict ideas as Kubelka, but still…

This film is not only my film. I am the director. This film was funded and produced by a production company, and I was hired to direct it. It was my idea, but I don’t have all the control over it, and I don’t make all the decisions. So they wanted to finish it on digital intermediate, while I fought for finishing it on 35mm, and we compromised. We said we do the digital intermediate now, and eventually we put it on 35mm. But it was really, really crazy, a lot of work and a lot of mistakes, and a lot of complication. For example all of the films in my film run at 24 frames per second, but we edited the film using DVDs and DVtape and all these are 25 frames per second. So when we had finished editing, we had a film that was 25 frames per second, with the soundtrack at 25 frames per second. So we had to conform everything at 25 frames per second, and then put it back to 24 frames per second! But some were shot at 18 frames per second and some at 9. So some frames had to be copied twice and the lab didn’t know how to do this and I told them: You just have to double every third frame and then 18 become 24. Then they asked:  Well, how do we get it to 25? And some people said, you have to go to the metadata in Final Cut Pro, and specify that it runs at 25, so it’s not adding a frame, it’s just playing faster.

This is so confusing for everybody. We just lost so much time and spent so much money dealing with digital processes and we went to a lab and spent two full nights with a sack of 35 and 16mm film, at the end they recorded it at 50 frames per second interlaced. We had to go back and do the whole thing over with at 24fps. It was just a nightmare! Whereas with film, one frame is one frame. You shoot it, or you shoot it twice. You can’t shoot it one and a half times. (laughs) So it was very frustrating.

We talked with Mr. Chodorov in December 2010 at 10th Festival of Film Animation in Olomouc, Czech Republic. Our interview is to be published in three parts. In the last issue you learned about his gallery and life in France, in the next one he will share with you some information about his documentary on experimental cinema, Free Radicals. Interviewer: Marie Meixnerová