Timothy S. Susanin is the author of Walt Before Mickey: Disney’s Early Years, 1919–1928 (University Press of Mississippi, 2011). The book traces the life and career of Walt Disney from his humble beginnings in Kansas City to the creation of his most famous character Mickey Mouse in 1928.

How deep did you have to „dig“ in Kansas City to research Walt’s artistic beginnings? Is the past still „present“ or visible there in any form?

I did a lot of research about Walt in Kansas City, but I never got to go to Kansas City while I was working on the book. Because I did not yet have a publisher, there was no real research budget to speak of. I was able to do research in New York, Washington, D.C. and visit the Disney studios in Burbank and Diane Disney Miller in San Francisco when other matters took me to those locations. I hope to get to Kansas City someday and see it for myself. However, I did do a lot of research through the Kansas City Public Library, both on-line and on the telephone. 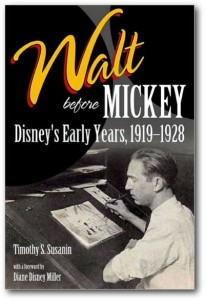 Your book starts with an introduction which is set during Thanksgiving 1966. How did you come up with this idea?

Early on, when my interest in Walt first took root, I set to view, in chronological order, everything he produced. (By the way, that is part of how I got interested in his early years.) Later on, when I was reviewing 1920s newspapers from Kansas City, I realized that the artwork in the advertisements in those papers looked very similar to the artwork in the opening titles of one of the last movies Walt produced. (The Happiest Millionaire, which was produced late in his life but was released after Walt had passed away.) Then I read that Walt screened a rough cut of Millionaire during his last visit to the studio. It occurred to me that this movie about the World War I era must have made Walt, who was very nostalgic, think back to that period, which is when his career started. I decided that this flashback was the perfect way to start the book, especially since the book ends with an epilogue that brings the reader up to date on what happened to each person in the book after the 1920s. I liked how the book itself was entirely about the early Disney years, but the prologue and epilogue dealt with later Disney years, which give more context to the beginning.

People usually think of Walt Disney as a talented and naturally successful artist/businessman. But your book shows that he had to struggle really hard to finally achieve something and win recognition of others. Was it one of the main impulses to write the book? To show that success doesn’t come naturally and that it’s often preceded by failures? If not, what was your primary motivation to write the book?

My real motivation was that I wanted to study the whole career, but I wanted to start at the beginning. As I realized it was harder to find the early films as well as a lot of detail about Walt during those years, I began investigating those years myself. I did not plan to write a book at first. The timeline and chronologies that resulted from my research naturally evolved into a manuscript. But I agree that the book shows how his perseverance paid off in the end. I love how he has survived, barely, several significant career blows by the time he loses the Oswald series to Charlie Mintz in 1928. I like how the book ends with Lilly and Walt getting on the train in New York, seemingly defeated yet again. The reader, however, knows he is anything but a loser: on that train ride home, he will start to create Mickey, and fame and fortune were just around the corner.

What personal qualities were in your opinion essential for Walt’s eventual success?

The book made me realize that there are myths about Walt that are not true. I do not believe he was an untalented artist. I do not believe that he was not a good businessman. I do not believe he was mean spirited to his employees (although we all have our bad moments and we all have our personality conflicts). What I believe about Walt, and why I think he became so successful, is that he was a talented showman (artist, writer, producer, even actor, as my book shows) who had quite an eye for recruiting other talent. He was relentless in pursuing his goals; quite simply, he never gave up. He was optimistic and had a sense of humor. He helped the artists around him when he could. I liked the Walt I learned about very, very much, and think he was a happy, ambitious youngster who loved what he did and had a strong work ethic and will to succeed.

How fierce was the competition for Walt’s studio in Hollywood of the 1920s? And what distinguished it from its competitors (both in artistic and business terms)?

My research was limited to Walt and his four pre-Mickey studios (two in Kansas City and two in Los Angeles) so I do not know much about the other studios. Several of the Disney animators, however, worked for Walt to learn the trade, and had ambitions to move on to their own studios and cartoon series. All of these young men had their own career ambitions, and the book touches on this and the famous walk-out of a number of the Disney animators when Mintz took away the Oswald series in 1928.

Could you briefly assess Ubbe Iwwerks‘ contribution to Walt’s eventual success? How important was he for Walt’s studio(s)?

Ubbe worked with Walt, in Kansas City, at Gray Advertising in 1919; the Iwwerks-Disney agency in 1920; the Film Ad company from 1920 to 1922; and Walt‘s Laugh-O-gram studio in 1922 and 1923. Ubbe followed Walt to Los Angeles, where he worked at the Disney Brothers and Walt Disney studios from 1924 until into the 1930s. Ubbe was a talented animator who helped create Oswald and Mickey and other early Disney characters. He did the majority of animation work on the first Mickey shorts. So, even putting aside what Ubbe brought to the Disney studios in later decades, his contributions were immense. Personally, I think Walt was a genius and would have become a cultural icon on his own, but many artists, Ubbe among them, made very significant contributions along the way.

What is you personal opinion of Walt’s first cartoons (his first animated fairy tales, Alice Comedies…)? Do they already show his genius?

The first cartoons were Laugh-O-Gram cartoons that Walt himself animated for the Newman Theater in Kansas City in 1921. After the Newman films, Walt animated modern fairy tales at Kaycee Studios and Laugh-O-gram Films, and then the first Alice Comedies. I found the earliest films fascinating because they were animated solely by Walt. (He gave up animating in Los Angeles in 1924 when his staff got large enough that he had to manage them all and focus on producing the films). Since I am not an animation expert, I cannot compare them to other films of that time period, but they certainly reveal a talented and inventive mind and a sense of humor.

Why was Mickey such an immediate success? What did the character have that Disney’s (and other studios‘) previous characters lacked?

My book ends just as Walt is about to create Mickey, and I have not studied in depth what happened next! However, I think the novelty of Mickey being a sound cartoon, combined with his attractive look (I believe animation scholars credit Ubbe with much of his design) and, most of all, engaging personality (my sense is most commentators think a lot of the personality in Mickey is from Walt) explain a lot of it.

How long did it take you to complete the book from its initial inception to the final version that was published in April 2011? Did you have to persuade publishers that there is still a need for another Disney publication?

I began studying Walt and his career in 2004. My wife and I took our three kids to Disney World, where I purchased a biography of Walt that left me wanting to learn much more. My publisher, the University Press of Mississippi, already purchased several Disney related books and, luckily for me, needed no convincing!

How difficult was it to collect data and materials for your book? Many people probably can’t imagine researching events that happened 80 years ago. And are there still significant „blind spots“ in Walt’s life and career?

It was a real challenge, and a lot of fun, trying to learn what a bunch of unknown young artists in Missouri were doing on a weekly or monthly basis that many decades ago. Except for Virginia Davis (who played Alice) and Ruthie Tompson (who appeared in the Alice films), no one is left from that era. And, because Walt was not yet famous, there was no real written record of him for most of that period. (He started to get a little press later on in the 1920s, with Alice and Oswald). Instead, I worked with interviews with those who were there at the beginning, including Walt and his fellow animators; old newspapers; 1920s city and telephone directories; federal and state census records; and whatever other primary sources I could find to try to recreate that decade in the Disney career. For example, there is a 500 page file in the archives of the federal bankruptcy court in Missouri that pertains to the bankruptcy of Laugh-O-gram Films. That was a gold mine of information about the day to day operation of that studio. For a long time, this project was more about an investigation than about a book, and I think the result is as close a peek into that part of the Disney legend as we are able to get.