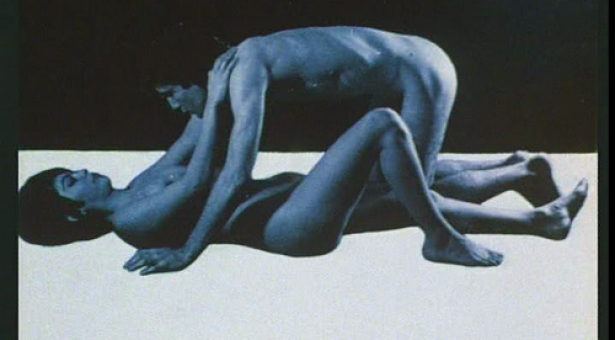 Thumbnail image: screenshot from structural film Piece Manda / End War by Paul Sharits, whose works were among the major inspirations for the project.

During her August residency, Czech Internet artist (c) merry will use the facebook profile of LA based curator Chloë Flores to create probably the very first sculpture on facebook.
You are welcomed to discover more about the Facebook sculpture, including its Kaderplan (score), on the project website.

The sculpture will be performed between August the 1st and August 31st, 2013 on facebook.com/itsallbeendonebefore, and can be perceived only during this time. 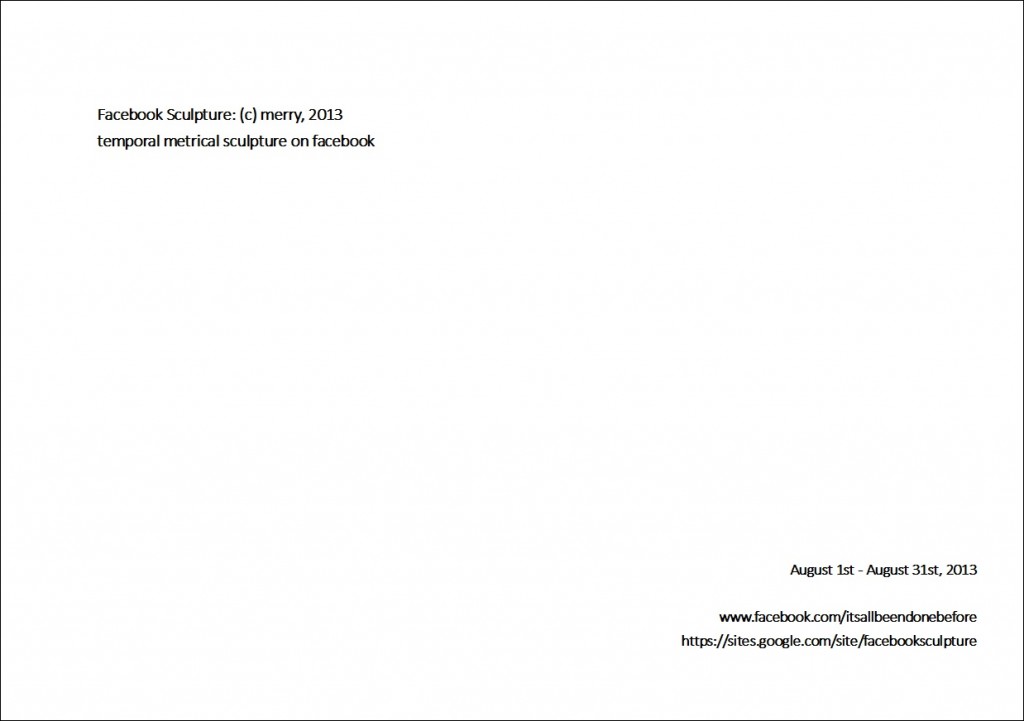 I was invited to participate on Chloë Flores curatorial project called “Chloë Flores Facebook Page” as artist in residence for this August. The residency is taking place on facebook, on user profile of Los Angeles based curator Chloë Flores. Every month, new artist is using the space provided by her profile in different manner.

Because of my deep interest in facebook-based net art and background in cinema studies, I’ve decided to use this opportunity to attempt to adapt the principles and philosophy of structural cinema and metrical films to different medium, resulting in creation of the first temporal metrical sculpture on facebook. That is, probably the very first sculpture on facebook – made on facebook out of facebook, following its structure and discourse. And of course, perceivable only on facebook.

The major inspirations for this were the metrical films by Austrian filmmaker Peter Kubelka from the late fifties, and works by structural filmmakers from sixties and seventies. The influence of Ornament sound experiments by Oscar Fischinger is also clearly visible in the piece.

On the core level, my intention was to provide the social network user with quite different experience with facebook as time-base medium. Breaking from its extreme emphasis on immediacy, interaction and topicality which can be, and often is, rather stressful, and giving it cyclical, pre-planned nature with content that is aesthetically pleasing, yet secondary.

For the Facebook Sculpture, a Kaderplan (score or scheme) has been composed, consisting of basic structural facebook elements as its compositional essentials (eg. “Like”, “Share external link”, “Status”, “Comment”, “Post picture”, “Post video”, “Accept friends” and so for). The Kaderplan takes into account the natural rhythm of the day (set for CET – the Prague time), the mass of time reserved for the sculpture as a whole, or even the moon phases.

The Kaderplan is absolutely mandatory for the August residency on facebook or any other realisation of Facebook Sculpture, and will be performed exactly as composed.

All the content that will enable the structural elements to be featured is conceptually insignificant. (However, it has to be said that the content has been carefully pre-planned for this realization in advance, in o rder to highlight the structure of the piece and also to keep the author from the temptation of “putting some meaning” into the piece during her performance in August. It cannot also be said that the content level of the sculpture has “no meaning” at all, or that there is no narrative present in it; due to the human nature, there always is a narrative and a meaning, and it is up to the recipient to discover it.)

You are welcomed to find more information about the inspirations for Facebook Sculpture, its Kaderplan, documentation and many more on the project website.

The sculpture will be performed between August the 1st and August 31st, 2013 on facebook.com/itsallbeendonebefore.