Art and the Internet: A 25 year-old relationship full of passion

Art and the Internet is a much-needed visual survey of art influenced by, situated on and taking the subject of the internet over the last two and a half decades.1 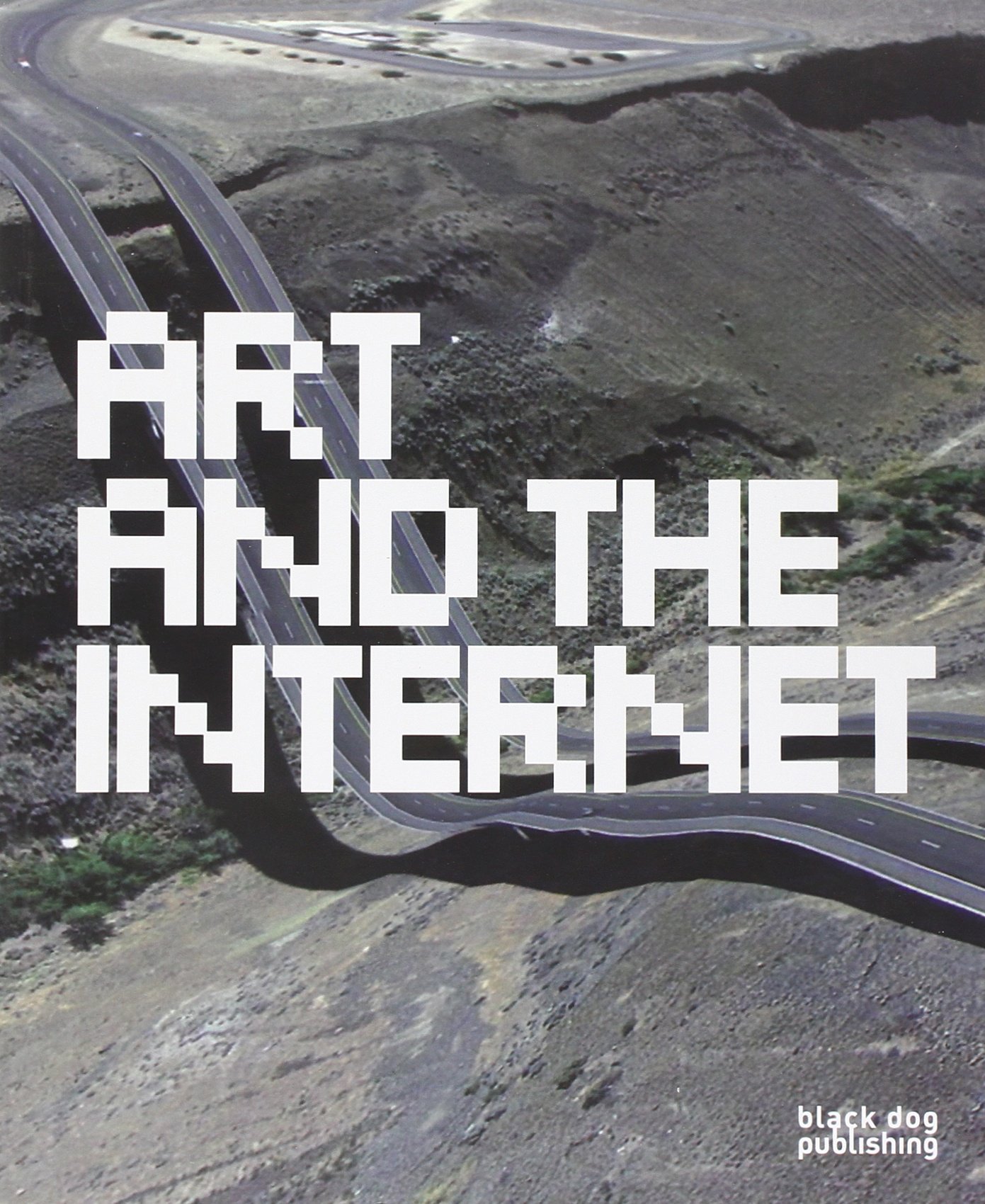 Art and the Internet

Over the past few years, several significant publications dedicated to Internet art, or “art and the Internet”, has appeared on the international market. Besides the one which is reviewed here – after a long time the first of greater quality books (“a much needed visual survey”) concerned with this topic – were released for example also: a must-have publication You Are Here: Art After the Internet (ed. Omar Kholeif, Cornerhouse & SPACE, 2014),2 a collection from Berlin mini symposium, published in the edition of e-flux journal, The Internet Does Not Exist (Sternberg Press, 2015),3 an anthology of Lunch Bytes No Internet, No Art (ed. Melanie Bühler, Onomatope, 2015)4 or one of the latest additions, Mass Effects: Art and the Internet from Laren Coernell and Ed Halter, following the legendary MIT Press edition and the institution in the field of exhibitions and promotion of the Internet art undoubtedly significant, the New Museum of Contemporary Art in New York.5

All of these publications have something in common; they view the phenomenon with appropriate distance, with no reason to question or defend the position of (Post-)Internet art as one of the major art forms of the 21st century; without the need to explain it or defend its existence theoretically; and with the awareness of the Internet omnipresence in the lives of their readers.

They already count with the “Internet awareness”, embracing everyday life, culture and the arts. New literary achievements are a continuation of the debate which sees the past, the present (and possibly the future) of art and the Internet through the prism of contemporary, Post-Internet age, while also dealing with the contextualization of contemporary culture, fine arts and socio-cultural and political situation.

The book Art and the Internet6 was published as the first one out of the foregoing (according to the imprint in 2013, in fact up to February 2014). Indeed, it was an eagerly awaited publication and from the very beginning it was ranked among the Internet “must haves“.

The thing is, that the art revolving around the Internet usually quite quickly becomes “outdated”, considering how rapidly the Internet itself is evolving (software, visual codes) together with our usage of it, how the society and the political context in which it is placed evolve, how our viewing angle is changing (Post-Internet age passing into something when “Internet does not exist” and “Without Internet there is no art”). Therefore, the printed publications dealing with the issue of “Art and the Internet” can be very quickly transformed into archaic uselessness full of dead links.

Therefore, it was worth to wait a while and to view the reviewed publication at a distance – the time had proved its lasting quality the best. 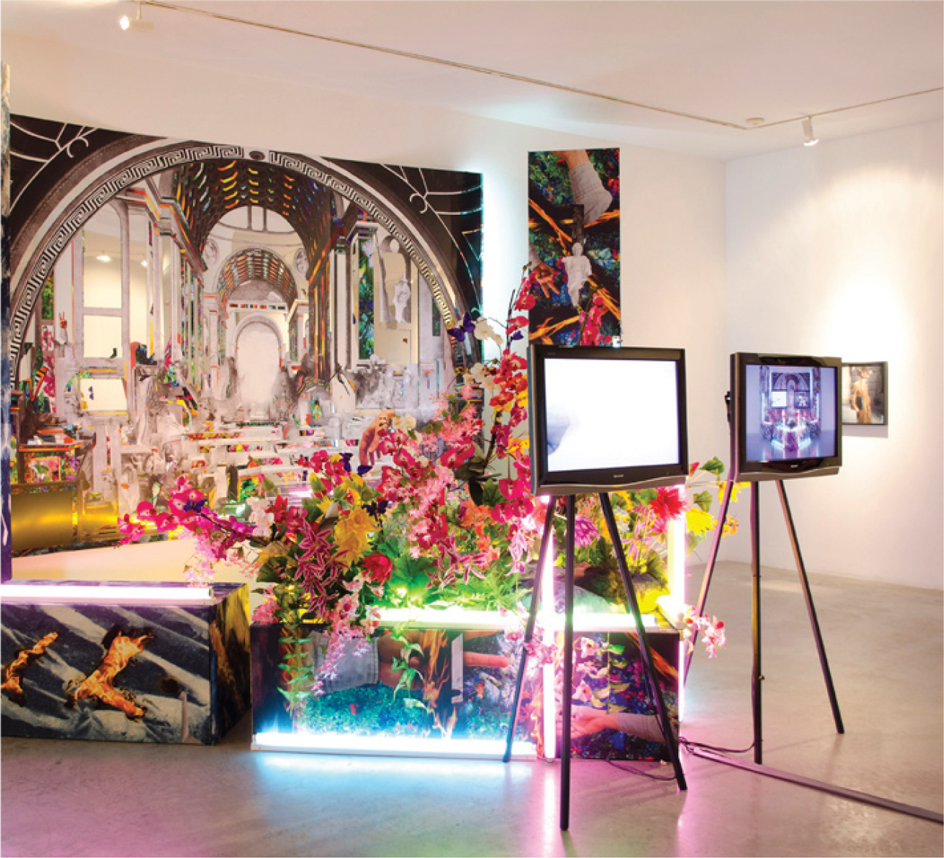 Over the twenty-five year history of the Internet, the relationship of art to it has transformed radically. (Official promo on the cover of the publication.) Art and the Internet focuses on visual exploration of this change, or the changes in Internet art, influenced by the Internet or topicalizing the Internet.

From the very beginning, the public has been addressed by this publication not only by its expressive design by João Mota (a truly large, 28 x 23 cm book on a colored, glossy chalk paper, based largely on consistent image documentation; photographs and screenshots), but also by carefully chosen terminology, including certain aversion to closely defined labels –something a lot of „Internet“ artists are rightfully allergic to. A problematic term of “net art” and its offshoots is smoothly evaded in the very title: Art and the Internet.

The publication examines the legacy of art which has used, has been located upon or has referenced to the Internet during the last few decades (thus basically over the past 25 years).7

The issue of at the first glance relatively complex area, ranging from classical intangible digital works by net art legends such as Mark Amerika8 Alexei Shulgin9 etc. up to objects created as reaction to Internet memes by Eva ad Franco Mattes 10 or digitally rendered busts by John Ralfman11 is more or less clearly divided into several visually rich chapters which form a crucial part of the book: “net art”, “Activist Art and Surveillance-Related Work“, “Internet-Enabled Participatory, Interactive and Video Art“, “Postinternet Art“ and “Social Media Influenced Art and Identity Construction“. The distribution into these categories is thematic, not chronological12, and therefore they can combine the names of several artists followed throughout the book, such is Aram Bartholl, Rollin Leonard, Aleksandra Domanović or Eva and Franco Mattes etc.13

The basis of the chapters is mainly the generous visual documentation of art works which is complemented by brief medallions of works and/or their authors.

From the early 1990s, the Internet has had multiple roles in art, not least in defining several new genres of practitioners, from early networked art to new forms of interactive and participatory works, but also because it is the great aggregator of all art, past and present. Art and the Internet examines the legacy of the Internet on art, and, importantly, illuminates how artists and institutions are using it and why.14

The publication is also complemented by three original theoretical studies. A historical insight, with an emphasis on the relationship between Internet art and gallery system, is provided by American educator and artist Nicholas Lambert (“Internet Art Versus the Institutions of Art”, pp. 12–17), a leading Italian expert on Internet art Domenico Quaranta (“In Between”, pp. 24–33) is also engaged historically and theoretically in a net(.)art discourse and the transformation of its exhibition strategies. Joanne McNeil in her loosely structured essay (“Connected by Camera”, pp. 18–23) appoints and analyzes the first performative live-streaming web cam projects such as JenniCam (Jennifer Ringley, 1996), SeanPatrickLive (Sean Patrick Williams, 1997–2001), Anacam (Ana Voog, 1997–2009), 500 Men in a Month. I’m an Oriental Whore (Isaac Leung, 2003), Webcam Tears (Dora Moutot, 2012– present), Social Turkers (Lauren McCarthy, 2013) and many more.

For connoisseurs are also very valuable the original interviews in the “appendix” section; namely with an independent curator Attila Fattori Franchini (about her artistic practice and platform bubblebyte.org), a collective LuckyPDF, Eva and Franco Mattes (ie. 01s.org) and an artist and a pioneer of the term Post-Internet art, Marisa Olson.

At the end of the publication, there are also included reprints of old essays and manifestos which clearly consider the development of thinking about Internet art from the perspective of that-days artists and reflect the transformation of the media/genre. The texts are arranged chronologically15. Beside the fact that those are some of the (partly historical, partly subjective) “important” texts of the discourse on Internet art, there is no apparent clue for their selection which thus seems to be, apparently inadvertently, rather haphazard than relaxed.

As a reader, I would certainly welcome an introduction to each section or an editorial comment which could elucidate the selection of these particular texts. A lack of emphasis on the editor and an accumulation of singularities in the book, whose interconnections has to decode the reader all by themselves (with the help of three self-contained essays at the beginning), put high expectations on the recipient, however, it certainly contributes to a reduced clarity of the publication within the meaning of editorial statement (so Art and the Internet, and it is my most painful complaint, may give the impression of a larger magazine).

The seemingly most useful assistance to the reader-outsider – the final overview timeline providing an overview of the most important chronology of the “art and the Internet” – once again raises the questions after the selection of the presented events.

Based on what key precisely were these, and not other ostensibly perhaps even more important events, chosen? Especially the thickening selection of highly diverse range of events from nearly present time raises many questions on its merits, and even the most dedicated reader has difficulty decoding the selection (the key is probably the relation of net art to the brick-and-mortar institutions, but we cannot be sure – the absence of just two or three explanatory words by the editor can be explained only as unfounded buck-passing, or worse, a kind of glee to its own readers – but for whom is the publication actually intended?).

In working with the book, I was also quite limited by the total absence of any registers or such absolute commonplace as a list of references (far from all the mentioned literature appears in numbered footnotes, and even the “Selected Bibliography” at the end does not help much with it).

Occasional typos or some broken URL’s can be attributed to the first edition and we can trust in their correction in reprint.

If we are to talk about the details, then, conversely the publication as an object turns out very well – although this is a paperback, thanks to a good quality of the cover and a sewn binding, even now it looks almost as good as new – despite the extreme strains I put it into during the year and a half I kept the book with me. (Which is a huge relief, especially in comparison with the already mentioned You Are Here: Art after the Internet which after one month seemed really quite disgusting already.) Such permanence and a physical beauty may be in the age of computers on of the main reasons why to reach for the printed book, which thus become appropriate documentation/archive of gradually disappearing digital projects.

Quaranta glosses one of his texts in a completely different publication16 saying that it was probably the most understandable to someone who was fond of net art a long time ago, but then fell into cryogenic sleep, and now, at the end of the 20th century, would like to catch up the deficit and orientate oneself in the current debate.

The reviewed publication could be characterized conversely – it is intended for contemporaries who often go to galleries or browse for art on the Internet and are interested in expansion of the horizons by providing a little historical background and insight.

From the Czech original “Art and the Internet” translated by Ivana Formanová.

Art and The Internet

Art and the Internet can be purchased directly through the publisher‘s website Black Dog Publishing or on Amazon.

Screencast of the The Royal Standard homepage during the Il Cavaliere website takeover by bubblebyte.org for the Liverpool Biennial 2012