Anibar – To Help the Animation Films to Thrive 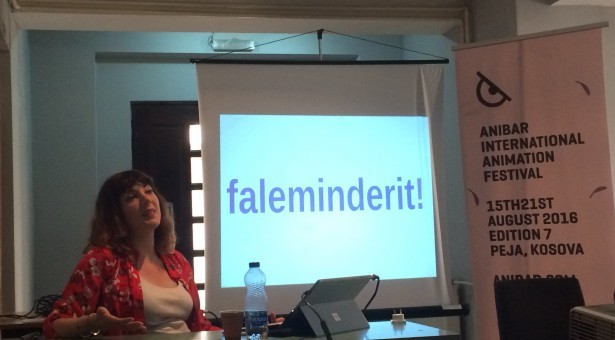 Peć lies in the Eastern part of the Republic of Kosovo, not far from the border of Montenegro. On the horizon are the hills of Rugova Mountains from where the Peć Bistrica river flows idly, at the moment the peak of summer. In the middle of the city centre there are houses under construction which have no facade. For a foreigner, this is a reminiscence of the fact that the country had been at war at the end of the last century and that some bruises are still healing. The locals, however, are not looking back into the past this evening. They wear their best clothes and walk through the streets where live music and celebration of a first Kosovo Olympian medal lasts. A medal achieved by the first Kosovo Olympian representative, judoist Majlinda Kelmendi. This was an important moment for a country which, in the last decades, endured a painful and dramatic way to its national identity. But that is not the only reason for a lively nightlife. It is Monday, August the 15th, and the International Film Festival Anibar is beginning in Peja.

From Disney to the Authorial Vision

Although a festival of animated films, the only one in Kosovo so far, and not as globally acclaimed as the Olympian medal, such activities are crucial for cultural emancipation of Kosovo itself. That is demonstrated in the case of the second biggest city of Kosovo, Prizram, where the festival Dokufest takes place. During its 15 years of existence, it had become a renowned film event with an exclusive programme. The conditions of Anibar are a little bit more modest, but during the short duration of the festival, whose foundations were thrown together from square one, it has become a significant cultural event. At the beginning there were two 18-years-old friends, Rron Bejri and Vullnet Sanaja, who have devoured films from Disney and Pixar studios. With this basis they put together a programme of the first year in a similar, not non-conformist fashion. Despite that, a great audience response came and therefore the organizers announced a call for an entry for the next year. The films entered from various parts of Europe were this time authorial, artistic works, of which the organizers or the spectators had no idea they exist. The new direction held by the second year started to attract even spectators out of Peja, where the festival is one of the few attractive local culture events. It was gradually discovered by the interested people from various parts of Kosovo, but also by the animators, theoreticians or the organizers of other festivals from countries reaching beyond the Balkan region. Nevertheless it is hard to quantify the number of Anibar visitors, because despite the upward tendency it varies depending on the programme. The biggest attendance was achieved last year, when Mike Reiss, the writer of The Simpsons, accepted an invitation to festival, which thus attracted many new visitors.

The current year did not have such a stellar name, yet the programme had a respectable 270 films, separated with lectures and workshops into 42 programme sections, which lasted whole week until the 21st of August. There were 4 competition sections – the international, Balkan, the student one, and environmental (where, by the way, a Czech student of animation, Alžběta Göbelová, had won with her film Říjen 2050 – October 2050). In a special selection, there were sections of Columbian and Spanish animation films or films of the young creators of the Visegrad countries. Part of it were thematic curator selections: collections of innovative video clips and a section of short films dealing with a theme of global warming (which reached the peak with a video by Adéla Sobotková, Naše těla chrání moře – Our Bodies Are Protected by Sea).

In almost all the programme sections the short format dominated. Concerning feature films there were placed only films Vrásky (Arrugas, 2011) from the Spanish director Ignacio Ferreras and Anomalisa (2015) from Charlie Kaufman. A demand for contemporary filmmakers also excluded any retrospectives of classical authors with an exception of a presentation of the work of Ward Kimball, an animator and illustrator from Disney. The focus on young talents has good reason in Kosovo. The cinema scene of the Kosovo territory had started to form in the second half of the 20th Century and its key moments are at the same time moments of cultural emancipation, because the country had gained its territorial and political authority only 8 years ago. Until then, Kosovo only participated on the film production of Serbia and only in year 1968 a film Uka i Bjeshkëve të nemura (Wolf from the Valley of Curse, d. Miomir ‚Miki‘ Stamenkovic) was shot. It was the first movie where the native language of Kosovians, Albanian, was used. Kosovafilm, a production and distribution company, had reached a boom of Kosovo film a year later. In the year 1990, it was stopped by Serbian authorities, and didn’t renew its activities until after the end of the war in year 1999. Yet the contemporary film production in Kosovo is not great, primarily due to the reluctance of the government agencies to properly finance the film industry. In the whole country, for example, there are only 2 cinemas with permanent operation and the last feature film purely in Kosovo production was filmed in 2014 – it is a film Tri Dritare dhe një Varje (Three Windows and a Drapery, d. Isa Qosja). The film Babai (2015, d. Visar Morina), which got an award for the best directing on the last year of Karlovy Vary International Film Festival, had been shot in a co-production of 4 countries, and one film, Vergine giurata (A Virgin under Oath, 2015, d. Laura Bispuri) had been shot in Italian.

With Respect to the Environment 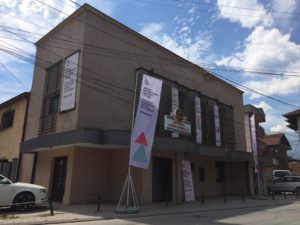 Thus it is not that surprising that it would be futile to look for animated films in the history of Kosovo cinema. Animation is a young phenomenon which is forming only in the last few years. At a question, if we can speak about the first generation of Kosovo animators, Arvan Berisha nods agreeably; “The first Kosovo animated film was made in 2015 and it is called Plisi. All of the previous ones are from Albania.” Like most of his companions who are illustrators or graphic designers, Arvan is a student of Art Academy in Pristina. “It is a good deal of self-study,” says Arvan, meaning mainly the internet tutorials, thanks to which you can learn to work with the animation programmes do-it-yourself. “The animation programme is missing at local schools. You can find it only as a marginal subject within different programmes”, he adds. But if you learn the animation practice, you can easily find a job within the commercial sphere. Arvan himself is working for an advertising agency, like many of his colleagues.

However, there are not many of those who stepped up from commercial work to the authorial vision so far. Gjon Marku, the author of the above mentioned short film Plisi (named after a traditional Albanian hat), is one of them. From the same year were the short films Fara (Seed, d. Gezim Ramizi) with an environmental topic, Nën Duvak (Under the Veil, d. Entela Hoxha) depicting a traditional Kosovo wedding ritual, Alone (d. Jeton Lakna) dealing with a theme of Kosovo war and also Beni’s Adventures, which was created in Vizart Digital studio as the first film in Kosovo created with 3D animation.

The organizers of Anibar are also trying to contribute to the on-going growth of animated films. One of the festival’s workshops, lead by the Spanish producer Toni Marino Vila, offers its participants with ideas or films in progress practical information and help regarding post-production and distribution. “Currently it seems that at least three workshop participants have had a chance to finish their works successfully,” said Rozafa Imami, the festival’s production manager. After all, the festival organizers are helping the culture life in various ways. Regarding the unpleasant situation of Kosovo’s film politics the festival organizers and film-makers are the ones who are trying to get the local cinema out of lethargy. “Within Anibar we are holding discussions where the city representatives are invited and we are discussing various problems. We are also making workshops during the rest of the year and our biggest aim is probably the revitalization and securing a year long operation of the Jusuf Gervalla’s cinema,” says one of the Anibar founders, Rron Bejri, about the main scene of the festival. “It is hard to maintain regular distribution with so few cinemas. That is why the main concern of the film-makers should be building as many cinemas as possible,” adds Bejri. Hand in hand with the educational activity part, the organizers are also connected to ecological issues. Among the environmental competition section the talk is about promotion of renewable sources through “Biking for Screening” activity, during which everybody on the festival could power the motion of the projector by pedaling an adjusted bike. “Two of our colleagues are also engaged in mapping the presence of the Balkan lynx in the region. Also, in the nearby mountains there is a national park where trees are felled. These things brought us to the environmental programme, which is included for the second year,” explains Rron.

Although there is a connection to ecological activism with animation film in only the second year of Anibar, it is one of the key shifts in the festival’s history. The young generation of Kosovians have got a vivid memory of the traumatic war experience and of the chaotic development of the country in the following years. Therefore they do not suffer from the indulgence in consumption so typical for their Western contemporaries, or from the frustration of Middle-Europeans due to the unfulfilled ideals of post-totalitarian society. They are open to the new impulses, they see the results and meaning of their effort and that is what gives them enthusiasm and appetite to change things for the better. At the same time, with cultivation of their aesthetic feelings they understand culture as a means to strengthening a responsible relationship to the environment and to creating a civic society and, finally, to overcoming the historically given ethnic tension.