Zde se nacházíte: 25fps » English » „I had to find new levels of motivation“

„I had to find new levels of motivation“ 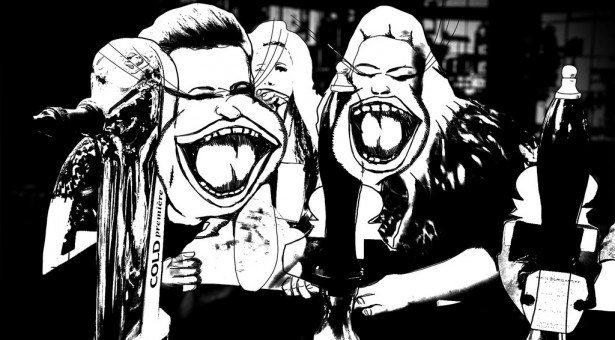 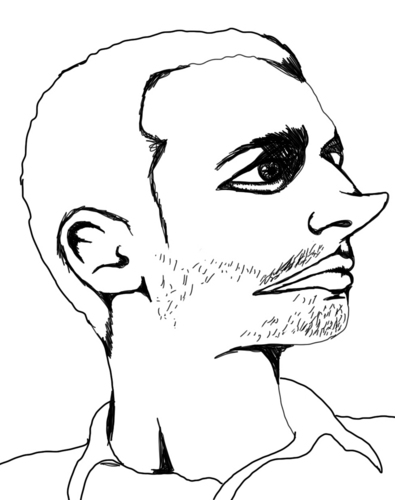 Joseph Pierce is a young British animator, who, amongst his other projects (e.g. experimental short State of Nature and music video for the band Enter Shikari) created award-winning shorts Stand Up (2008) and A Family Portrait (2009). In these films he used rotoscoping for creating realistic movements of characters, but with additional animation added to those characters strong sense of grotesque, and so he created very original, odd and bleak pieces . Joseph finished his new short called The Pub at the end of January. The film was shot in London’s pub The Camden Eye and hopefully we might have a chance to see it in the Czech Republic at some of the festivals.
Even though Joseph was quite busy, he found a time to answer our questions. At the very beginning, he mentioned his inspiration by Jan Svankmajer‚s work. In this e-mail interview he talks not only about this inspiration, but also about collaboration with a known comedian Robert Popper, and of course, about his new film.

You mentioned you started animating because of Jan Svankmajer. Could you tell me more about this influence, as well as about your artistic background and your inspirations?
I fell in love with Svankmajer’s textures and the visceral quality of his work. Despite moving on from stop motion this is something I like to keep close. I also enjoy the surrealism and consider elements of my work to be surreal. I come from an experimental background, making abstract stop-frame animations, but started to want to tell stories (influenced by British realism, Dogme 95 etc.), so I came up with this rotoscoped technique.

Robin Cooper web series is really funny and the simple animation works perfect, as it illustrates what Robin and Mr. Lopez are talking about and take it to another level. How was this collaboration with Robert Popper and BBC? How much of an artistic freedom did you have?
This was a great collaboration, someone from the BBC had seen my graduation film (Stand Up) and wanted me to work on something for BBC Comedy online. Robert Popper had these phone conversations he had made and they thought it would be fantastic to animate to them. I was really left to create the animations myself, many of the drawings were based on Robin Cooper’s mad scribblings (by Robert himself). I would show Robert what I’d done and he’d give me a bunch of notes to make it funnier. I learnt a great deal about comic timing, Robert is like a Comedy Doctor, so precise and detailed.

Where did your observation of people, who often act like animals and therefore they suddenly appear as animals, came from?
It was just an observation of when people get carried away or over-excited (or drunk!) they forget about social constraints and let a more basic side break through. This is what a lot of my animation is about, whether it’s a homeless guy turning into a bear or a giant tongue popping out of someone’s mouth.

This sort of taking emotions under magnyfying glass and beginning of your style is visible in Big on Love (2007). How did you create this film?
This was an excercise during my first year at film school. We had to create just six lines of dialogue and have an embrace of some sort in it. We actually created characters then swapped amongst the six of us, so the woman with the llamas head was given to me by my friend/classmate Masako. I’m now very grateful of it!

I used this excercise to try out rotoscoping which I’d played around with for a year or so. I rotoscoped a simple line of dialogue, and watched the results. To be honest I was pretty dissapointed, especially as it took forever! So I added this long slimy (Svankmajer-esque) tongue to the end of the scene. Suddenly it was surprising and interesting, and also quite funny. 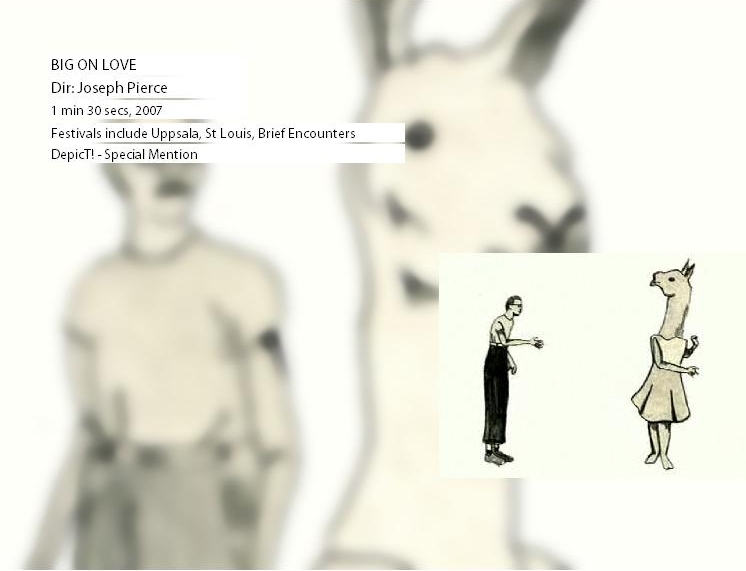 Do you like some rotoscoped films? What is your opinion on rotoscopy?
Some I do like, others I don’t, it’s the same for every technique, it depends how it’s used. For instance I enjoyed Bob Sabiston’s short Snack and Drink but I don’t find his features with Linklater so interesting, to me it’s like an effect applied to the footage. I like expressionistic drawing and prefer to look to illustration and painting for visual inspiration.

You finished your new film The Pub. There seems to be an interesting story behind this film. Not to mention a huge time and financial investment… What do you appreciate about this project?
I appreciate that it’s finally finished! It was a scary summer as I knew that if I woke up the next day and decided to stop working on it, nobody would stop me. I had to find new levels of motivation. But I appreciate having ownership over it, my good and talented friend Mark Grimmer helped me produce it through his amazing company 59productions, so I’m forever thankful. But we received no commision or public funding, so it feels great to own it, especially as it’s such a personal film.

In the press pack there is a mention that The Pub, A Family Portrait and Stand Up are trilogy. So – does it mean you pushed the limits of your rotoscoping technique to certain level and your next work will be different kind of animation?
Who knows? I wouldn’t use this technique to make another short but with a team and a budget i’d like to try a longer short or a feature. I am interested in creating hybrid animation with elements of 3D or live action. It’s just the animation (constant drawing) is a killer, I need more help!

Could you describe the process of making of your rotoscoped films?
For Stand Up and The Pub I shoot the film with actors on an HD digital camera, before editing together and removing every other frame (so it plays 12frames per second). I then use Photoshop and a Wacom to draw over every frame before compositing in After Effects. With A Family Portrait I printed out every frame instead and drew it with a pen and inked in the colours, then scanned the frame back into the computer.

In A Family Portrait, I really enjoyed those POV shots, where daddy is looking from his height at mummy and on contrary. In Stand Up, one of the things I liked was the idea with turning lights of the faces off. Do you have a clear idea about camera shots and movements from the beginning, is it all storyboarded?
Funnily the faces turning off like lights came about when I was fed-up with animating so I hurridly finished the sequence with just an outline. I enjoyed the effect but it was just a happy accident. It’s what people mention more than anything else! I work closely with my cinematographers before I shoot, for instance we knew that A Family Portrait wanted to be quite still and composed, like the camera on a tripod, before it descends into chaos. With The Pub I really wanted everything as a POV shot, so as to put the audience inside the characters.

You also worked on animations for theatre pieces (Doctor Atomic, The Minotaur, Warhorse) in production of “fiftynine productions”. Did you learn anything new from these experiences?
These were great pieces to work on and collaborate with theatre designers and directors. Animation is branching out and people are getting more creative, so it’s great to be part of something different. Dr Atomic was amazing as it was an Opera based on the conception of the atomic bomb, so the animations were created using chalk equations on black board.

On your website, there is a mention about feature script of Gap Year UK for BBC being in progress. What is this project?
This is a feature script I’ve been co-writing with friend and director Aneil Karia and developing with BBCfilms. It’s a live-action teen comedy, very different from my shorts, but a lot of fun!