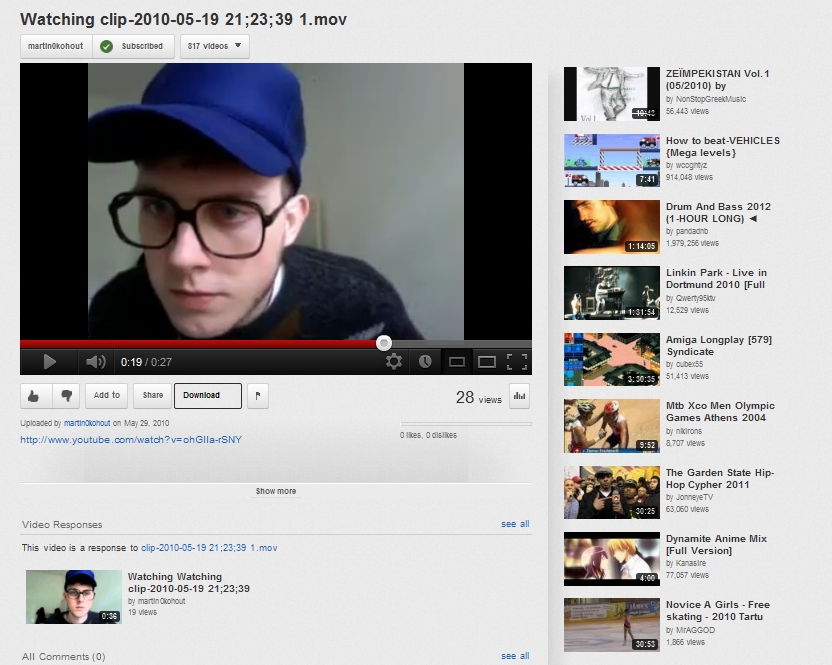 Video Watching clip-2010-05-19 21:23:39 1.mov is part of Martin Kohout’s extensive internet project, Watching Martin Kohout. (If his name feels familiar, you could have heard it a year and half ago when Kohout’s elderly work, Moonwalk, 2008, was singled out within Play Biennial and presented in New York Guggenheim Museum among 25 YouTube most creative videos – fact that had had a lot of attention in Czech media.)

Kohout, who lives and works in Germany for several years now, is not occupied only with Internet projects (his range of artistic activities is very wide actually, he tried on street art, painting, interactive installations, objects, appropriations, netart, photography, camera, directing, conceptual art and he has even been flirting with literature recently.) As member of web 2.0 generation he keeps on coming back to YouTube. One of his last YouTube projects is Watching Martin Kohout, opus realized between April 7th 2010 and March 5th 2011 that is still available on YouTube.

It consists of 817 web camera videos capturing Kohout every time when watching YouTube clip. Final video was – as video reply – uploaded on Kohout’s channel, hyperlinked to the original clip and named with an easy key: the word “Watching“ was added in front of the watched clip name. All without any explanation towards shocked YouTube users.1

Watching clip-2010-05-19 21:23:39 1.mov video is one of 5 videos “with a blue baseball cap” captured on May 29th 2010, showing Kohout watching works by his Berlin colleague, Constant Dullaart, and is one of the more active Watching videos. In most clips, Kohout motionlessly stares at the monitor from a stable distance, without making any sound or facial expression (which makes a gentlest mimic gesture remarkable). In this video, on the contrary, he expands as close to the monitor as possible and pointedly copies the right-left motion in watched clip with his upper body, demonstrating his concentration. Whole procedure since turning the camera on to switching it off  takes 27 sec.

When watching Kohout’s videos, you need to reckon that the “in-front-of-the-webcam reality” recordings represent just part of the artwork2 which lives its own internet life further on. It gains new comments and video answers from other YouTube users and changes its appearance every day, as YouTube automatic search of recommended videos continually creates new coherencies and contexts. Apparently, original video plays its important part as well – and not just because of its direct projection into Kohout’s reactions (or an audiotrack sound in the background).3 It also influences the way of perceiving Kohout’s reply – if we get to the original clip via watching Kohout or the other way round. Other users‘ comments are also an indivisible part of this artwork, as well as number of views, number of likes and dislikes or YouTube statistics with its users‘ demography analysis, video milestones and its city of origin.

That all makes extraordinary hypertext, critical comment understood and felt by each YouTube user in completely different way.

From the Czech original translated by Monika Kubešová. 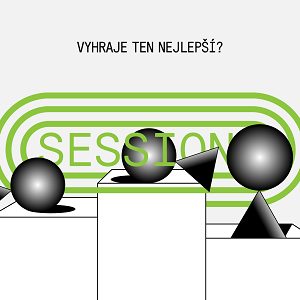