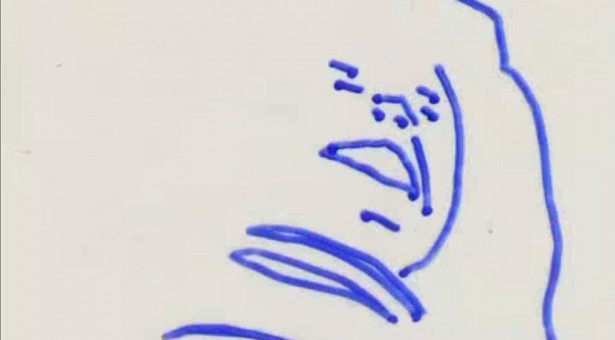 „To avoid fainting repeat: It’s only a movie! If it doesn’t help either, only rotoscopy can save you!”

Matěj Smetana studied at Faculty of Fine Arts in Intermedia and Painting 3 Studio by Petr Kvíčala in Brno. He started following PhD studies in 2008 at The Academy of Fine Arts in Prague in Intermedial Formation Studio II by Jiří Příhoda. He has devoted his creative activities mostly to installations, objects and comic books – thus he does not use the moving picture primarily. He prefers conceptual mindset, critical to art institutions. He came at rotoscopy when on internship in The Paint Studio by Josef Daněk. However, he did not get pleasure from classical paint art view and decided for retracing.

Horror movies The Last House on the Left, Evil Dead and Nightmare on Elm Street 3 represent the type of pictures aimed only at frightening spectators. But by using a simple blue marker line, Smetana managed to largely reduce this scary atmosphere. You can’t capture darkened background or colourful catchiness by thin single-coloured contours after all. Red blood can also hardly be spat out by a blue marker. Red creepiness is thus shifted into distinguished distance of blue aristocratism in both first movie subtitles and very plot of second trailer. Yet the author managed to capture characters´ facial expressions and main storyline excellently.

The animation came up by retracing film frames from a PC monitor and a subsequent diversion back into computer form. Rotoscopy from a child room would like to say. Pejorative characterization of Smetana’s work is not outright however. These three previews selection appears to be sophisticated as well as their escalating way of fear and violence factor order. The very trailer The Last House on the Leftis hardly traumatizing. Even demonic voices with their “It’s only a movie” assure us about it. But at the same time, isn’t just this sentencing the strongest impulse to get scared? Might be so. Evil comes the very next moment. The trailer for Evil Dead is guilty of being “horrorous” in extenso. A character redrawn of this movie was used for B, a movie show visual presentation under curator supervision of Terezie Nekvindová and Sláva Sobotovičová with additional title horror – weirdness – violence – porn – twisted sentiment. Smetana’s animated trailers were introduced to me just at this show. I was mostly affected by the last part of rotoscopic adaptation of Nightmare on Elm Street 3. Surreal connection of infant viewpoint and freezing music which is significant in a horror movie is strongest in there. Furthermore, for the whole time spectators are kept in solid tenseness which culminates in a startle at the very end.

Matěj Smetana was up to the name of his “project”. Rotoscopic interpretation became more distant from freezing atmosphere; the outlying echo of fear resides in the background by virtue of original sound disposal. This precisely corresponds with insecurity evoked by voices repeating “It’s only a movie.” Supported by a marker he proved wrong angry primary school art teachers who constantly hammered in a crayon having the brighter future. His retraced contours – as bluffing with simplicity as they can be – reach far behind primary school perception.

From the Czech original translated by Monika Kubešová