There are filmmakers with whom to do an interview seems to require superhuman effort. They do not like talking about themselves or commenting on their films; they answer the questions you have prepared with a single sentence (God forbid, with one word). They let you drench in your sweat, while you are fiercely trying to engage them in the interview. But then there are those with whom it is enough just to hint at a topic and you suddenly cannot stem the flow of words and, in the end, there is nothing for it but to listen enthusiastically and to nod to everything they say. Samuel Fuller also belonged to this group of eloquent filmmakers: he is described by all those who were lucky enough to chat with him as an immensely energetic, open and friendly chap, who loved talking not only about himself and his work but also about the cinema in general, politics and his beloved journalism.

Fuller never became conceited or bitter; he loved surrounding himself with young filmmakers, who greatly admired him and onto whom he could pass his experience. Apart from Truffaut and Godard, who like other contributors to Cahiers du Cinema discovered him in the 1950’s, he later counted among his friends from the younger filmmakers‘ generation also Wim Wenders, who always found a role to play for Fuller in his new film, and Mika Kaurismäki with Jim Jarmusch, who liked cooperating with him as well. In Hollywood, he was extolled by Peter Bogdanovich, Steven Spielberg and Jonathan Demme. In Adam Simon’s documentary The Typewriter, the Rifle & the Movie Camera from 1996, in which Fuller appears aged but still active, Martin Scorsese and Quentin Tarantino together with Jim Jarmusch and Tim Robbins declare their cinephilic love for Fuller. 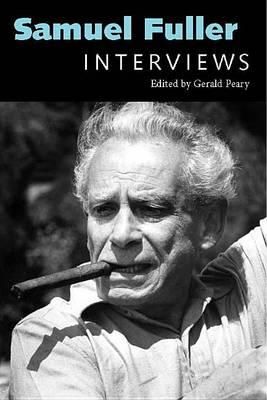 This year, in relation to the hundredth anniversary of the director’s birthday, a book of interviews appeared on American book market, published by University Press of Mississippi as part of Conversations with Filmmakers series. The popular book series of interviews with world-known filmmakers has been being published from as early as the end of the 1990’s, and the slim, hundred-and-sixty-pages-long volume of Samuel Fuller: Interviews belongs to the eighty published so far. The American film critic, teacher and editor-in-chief of Conversations with Filmmakers Gerald Peary, who is also the author of early volumes dedicated to Quentin Tarantino (1998) and John Ford (2001), deserves the credit for making particular interviews with this extraordinary film auteur accessible again in a comprehensive manner.

For the anthology, Peary collected the total of sixteen interviews from American, British, French and also Australian publications that were written between 1949 and 1988, that is, during Fuller’s active directorial career. As a whole, the interviews then cover almost all of Fuller’s work. The selected contributions are the director’s commentary on his creative work not only in the area of directing but also in scriptwriting and production. They give us an idea of his relations to other members of the crew, of the creative process in the case of particular films and, last but not least, of the films‘ (a)political dimension. For instance, the interview conducted by the Swedish film critic Stig Björkman for the British film magazine Movie from 1965 offers a contemplation of Fuller’s directorial style, while Fuller’s conversations with Eric Sherman and Martin Rubin (originally published in The Director’s Event Interviews with Five American Film-makers in 1970) and with Richard Schickel (whose interview, done in 1982, is the only one that has not been published until now) present an engaging revision of his work. Fuller’s journalistic career also occupies an important place in the book (the interview with Richard Thompson for the American film weekly Movietone News from 1976), as do his relationship to D. W. Griffith (Russell Merritt, 1980), his reflections on film shooting in France (Hubert Niogret, Michel Ciment, Philippe Rouyer, Jean A. Gili, 1988) or his opinions on the horror genre (François Guerif, 1988).

As half of the interviews published here date back to the 1980’s, logically, a lot of space is given to Fuller’s war opus magnum The Big Red One (1980). There are maybe only two films that received less attention on the interviewers‘ part: The Baron of Arizona (1950) and Hell and High Water (1954); while, with the second one, this can (to a certain extent) be explained by the director’s somewhat colder relation to this submarine film. Only one film remains without any reflection whatsoever – the last of his twenty-three feature films: the adaptation of David Goodis’s novel Street of No Return, which premiered in the spring of 1989. The fact that, unlike interviewees in many other books of the same series, Fuller rarely repeats himself can decidedly be seen as the book’s merit. The interviews themselves are preceded by an introductory text by Gerald Peary (he also interviewed Fuller for the Boston alternative weekly The Real Paper in 1980), in which the author describes specific aspects of the director’s work and briefly summarises his own critical approach to the work. The introduction is supplemented by the customary chronological time axis of the filmmaker’s life. Perhaps it is a pity that the axis in its second half turns into a brusque inventory of the works produced without any commentary. At the end of the book, Peary adds an auxiliary (but by far not an exhaustive) bibliography which consists not only of historiographical and analytical materials on Fuller’s work, but also of references to other interesting interviews that did not fit into the book (or the rights to their re-printing could not be obtained: such is the case of Fuller’s interview with Robert Porfirio and James Ursini for the third Film Noir Reader in mid-1970’s). The bibliography also refers to Fuller’s posthumously published, and by cinephiles hugely appreciated, autobiography which, all things considered, thanks to its accumulation of the director’s thoughts, opinions and commentaries cannot be surpassed by any book of interviews.

Gerald Peary (ed.)
University Press of Mississippi, 2012
160pp.
The book is available on the publisher’s website.