Recently published book by William Luhr is part of Wiley-Blackwell’s New Approaches to Film Genre series which strives to provide fresh and insightful overviews of established film genres (so far, there have been individual books on the western, horror film, historical film, religious film, war film, fantasy film, multi-protagonist film and romantic comedy; forthcoming in May is Barry Keith Grant’s overview of the Hollywood film musical). The series is primarily aimed towards students and teachers of film studies and related disciplines, but it has plenty to offer to „average“ film buffs, too.

As springboard for the following discussion, Luhr uses Billy Wilder’s Double Indemnity (1944) which he treats as a prototypical film noir, displaying many characteristics associated with the genre (yes, he regards film noir as a genre of its own, even though its definition will always be somewhat vague and shadowy). He discusses the voice-over and its various functions, the centrality of point-of-view or the permeation of decay into everyday life as central conventions of film noir. Brief introduction is followed by historical overview in which Luhr traces the development of film noir from its beginnings in the early 1940s to this day. He treats the years 1940 and 1941 as noir’s prehistory with the genre coming into full bloom around 1944 and 1945 with films such as Murder, My Sweet (1944), Double Indemnity and Scarlet Street (1945). The prominence and almost immediate recognizability of film noir (despite the lack of proper term – at least in the U.S.) was demonstrated by several parodies, the best of them being My Favorite Brunette (1947) starring Bob Hope. In the late 1940s the genre was transformed by a series of docu-noirs focusing on the work of policemen and secret agents. The baroque films noirs of the 1950s signaled the demise of the genre which was revived once more in the 1970s with neo-noirs such as The Long Goodbye (1973) and Chinatown (1974). The noir renaissance continues to this day and is an apt demonstration of genre’s richness and longevity, arguably rivaled by no other Hollywood form. 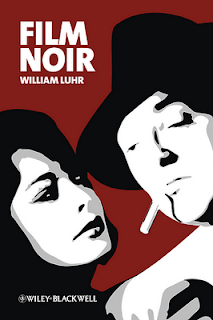 The chapter on history of film noir is followed by critical overview, tracing the discussion of the definition (or, perhaps more aptly, of various definitions) of film noir: among many others, Luhr mentions pioneering magazine articles written by Nino Frank and Jean-Pierre Chartier, the first book-length study of film noir by Raymond Borde and Etienne Chaumeton, influential work of Paul Schrader and Raymond Durgnat, monographs of Foster Hirsch or Frank Krutnik and recent publications by James Naremore and Edward Dimendberg. He stresses film noir’s heterogenity and elusiveness and comes to a conclusion that it can be defined only in very general terms: as a group of very dark films (by the same logic, the genre of comedy is a grouping of very funny and amusing films). No other characteristics (for example low-key lighting, voice-over narration or the character of femme fatale) are common to all films generally regarded as films noirs.

Six chapters are made up of discussions of individual films: Murder, My Sweet represents noir’s emergence at the end of WWII; Out of the Past (1947) was selected as a representative of noir’s heyday; Kiss Me Deadly (1955) marks the demise of classical film noir and already points to neo-noirs such as The Long Goodbye and Chinatown, each discussed separately in their own chapters; the book concludes with an analysis of David Fincher’s Seven (1995). The analyses are all very readable and informative and are very likely to absorb even those readers who know the films in question by heart. Avoiding the trap of being too descriptive and realizing that there are no definitive interpretations, Luhr discusses the films in carefully selected contexts which illuminate only certain (but always the most pertinent and relevant) aspects of the works. For example Robert Altman’s The Long Goodbye is discussed in relation to its original hostile critical reception, to its formal strategies, to the transformation of Chandler’s Philip Marlowe, to the development of the genre and artistic contribution of writer Leigh Brackett, who was involved in making Howard Hawks‘ The Big Sleep (1946) almost three decades earlier, and finally to the non-detective films noirs of classical period (because in many respects Altman’s Marlowe is closer to the doomed protagonists of Double Indemnity and Out of the Past).

The book includes an index and a list of recommended reading. The text is accompanied by 44 plates from individual films.

Was there acute need for such book? I’d say no. Is it good that it was published in spite of that? Certainly yes! I think I can explain the apparent contradiction. Luhr’s book doesn’t contribute anything substantial to the ongoing discussion of film noir. But it is a perfect text for those who want to learn about film noir and are confused by the quantity of materials on the subject. Extremely readable and practical, well-researched and with only a minimum of inaccuracies1, Luhr’s book is a great guide to the vast and constantly growing universe of film noir.