Pamela Gay: Some sci-fi break reality for a plot 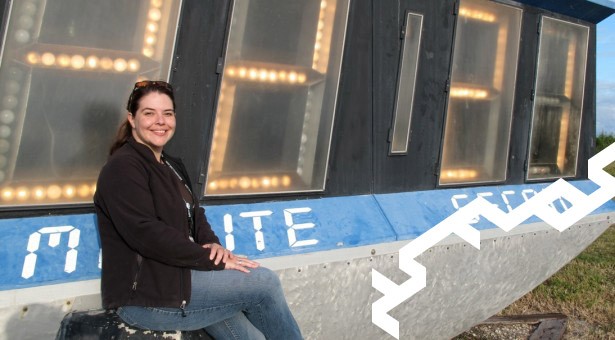 Pamela Gay arrived into the Olomouc as a guest of film festival AFO. She is successful scientist in her field of study and she has been simultaneously intensively propagating science using new media. Klára Feikusová was chatting with her about how one can popularize the science, how she feels as a woman in science and how physics in sci-fi or comic books works.

Why do you think the popularization of science is important? And why do you think it’s important in your field?
Science in general is something that allows us to change our future. Without science we don’t find ways to use fire to do things  more than cooking meat but with science we can turn the fire into steam engines that started industrial revolution that give us wool and cloth and printed books that allow us to change things even more.  And a lot of science is kind of boring and dry when you first starting to learn it. Beginning chemistry is not exciting unless you happen to catch something on fire by accident. But astronomy is one of the sciences that we love when we are small. All of us loved astronomy and dinosaurs and it was an asteroid that killed the dinosaurs so we won. And if as an adult I can talk to other people about space and make them remember their childhood love, make them curious and make them want to learn astronomy, I can use that as stepping of point to get them to learn everything because astronomy is one of those sciences that pulls together chemistry and physics and today as we start to understand where life might’ve been in the galaxy, it pulls together biology as well. It’s a gateway to drag people to want to learn.

You’re doing a popularization through new media. What potential do you see in it, especially the internet?
The internet is the great tool that allows people to find content that speaks to their deepest curiosities and also becomes their companion while they grocery shopping or folding laundry. There‘re things all of us have to do that drags us from our television and keyboard and leave us often alone and bored. But with new media we never have to be bored again. You can be stuck in the traffic on a crowded bus next to some smelly person and you can be transported into another universe through the world of podcast. I hope that new media through all of its different varieties as it goes out to people’s cellphones and all other small technological bits prevents boredom and encourages  education. There’s no reason that people can’t learn everyday while stuck in traffic. 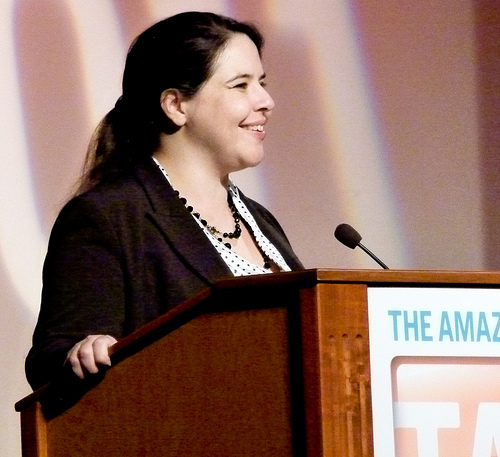 What characteristics the popularizator of science should have to interest people?
When you‘re talking about science you have to first of all remember that just because you love something and have studied that something your entire life, other people may never heard of it. So you have start from ground zero and explain things with words that you don’t have to go to university to understand. But you also have to remember everyone has the capability of learning. There’s lot of people who when they start communicating science they communicate as if they were talking to ten years old even though they are talking to professional who’s all grown up with kids of his own. We have to remember to use words everyone knows but you can use those words to describe complicated concepts and those complicated concepts are where the things start to get interesting. Don’t share beginning’s bits that are easy and a child can understand, share the juicy bits but with words that everyone can explain.

How do you feel as a female scientist? How do you feel as a female astronomer?
One of the things that always struck me as odd is in the field of science education you find more women than you find in the field of science. But when it goes to science communication it’s still mostly men. I know there are lots of sociological reasons for that. People tend to naturally see the man as an authority figure so if you’re going to believe a random person talking in the room, sociological research says that you’re going to believe the random, tall guy speaking in a deep voice. But what I love about all those conferences scenes are women who are saying: „Hey, I’ve got a brain, listen to me, I have a great things to say too.“  And when we let people of both genders speak that means more voices increasing scientific literacy, more diversity encouraging children to study science. If we really want tomorrow to be better, we need to raise all children even the ones who are going to be dancers and artists so they’ll understand science and technology. It’s what we need to make critical decision where should we buy a house, who is the best person to vote for, what is the best economic policy, and everyone needs understand science and technology because it influences so much of our life. And this means that that little kid going: „I’m not gonna be a scientist, I’m not white, I’m not a boy.“ they need to look up and see black Neil deGrasse Tyson, and Indian Kevin Govender and white Pamela Gay. All of our different colors, all of our different genders, all of our different backgrounds show that anyone, if they work hard enough, can do science. 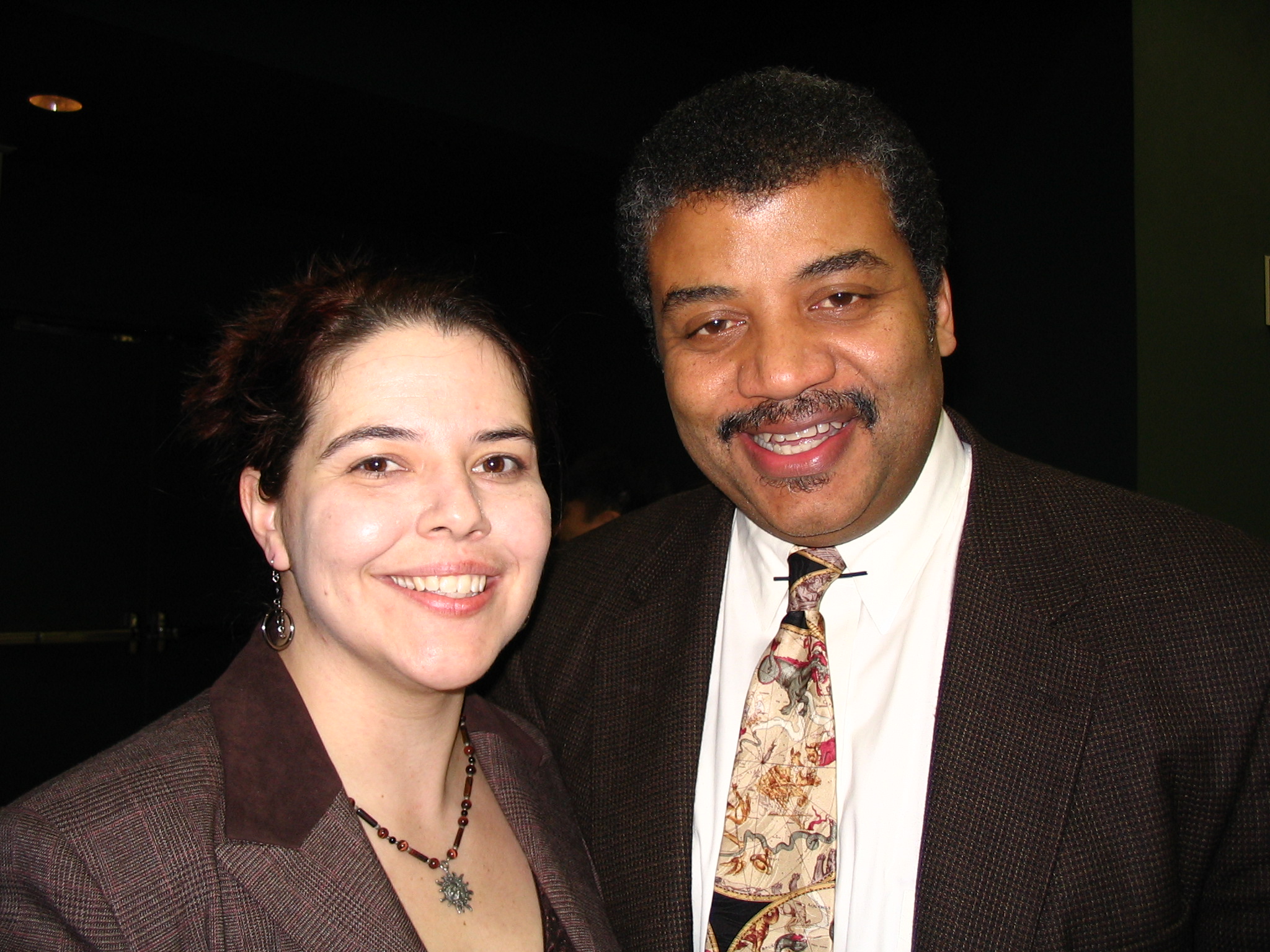 The science isn’t always popular, especially in schools. How do you think it should be promoted and shown to people?
One of the problems we have with schools – and this is everywhere in the world – is we don’t have enough good teachers. It’s a career that doesn’t often pay as well as other careers, teachers in many nations aren’t treated with a lot of respect. And if you have a teacher, who’s a fabulous English teacher, but there’s suddenly not someone around to teach science, and this teacher is now teaching English and science, he may not be fabulous science teacher. And so if you are afraid of science and you’re trying to teach it, you don’t know it and you’re trying to teach it, the kids aren’t going to love it because you don’t love it. We need to start by, first of all make sure the teachers that teach science are educated in science, English teachers who are teaching are English educated. If we can have our teachers be passionate and well educated in the thing their teaching kids will love it too. And then we can make children love science by making sure their teachers love science too and that they are teaching in their field and that they are treated with a respect and dignity they deserve too.

How do you look at science-fiction as a scientist?
When watching science-fiction I have two options. I can go completely with the moment and accept that they’re making up physics and I’m actually good with that as long as it’s consistent. Nothing makes me hate a movie more than when they are completely inconsistent with when they use real physics and then they use made up physics and the two contradict. That hurts my soul. And it’s okay in science-fiction construct to make up science that doesn’t exist. What isn’t okay is to do what was done in the movie Armageddon, and take real physics and ignore it and make up your own stuff in place of it. We know real science and in many cases the real science is far more interesting than anything human can make up. The reality is crazy and awesome. So I don’t understand why some science-fiction has to break reality for a story plot when they can make something way more awesome with reality. 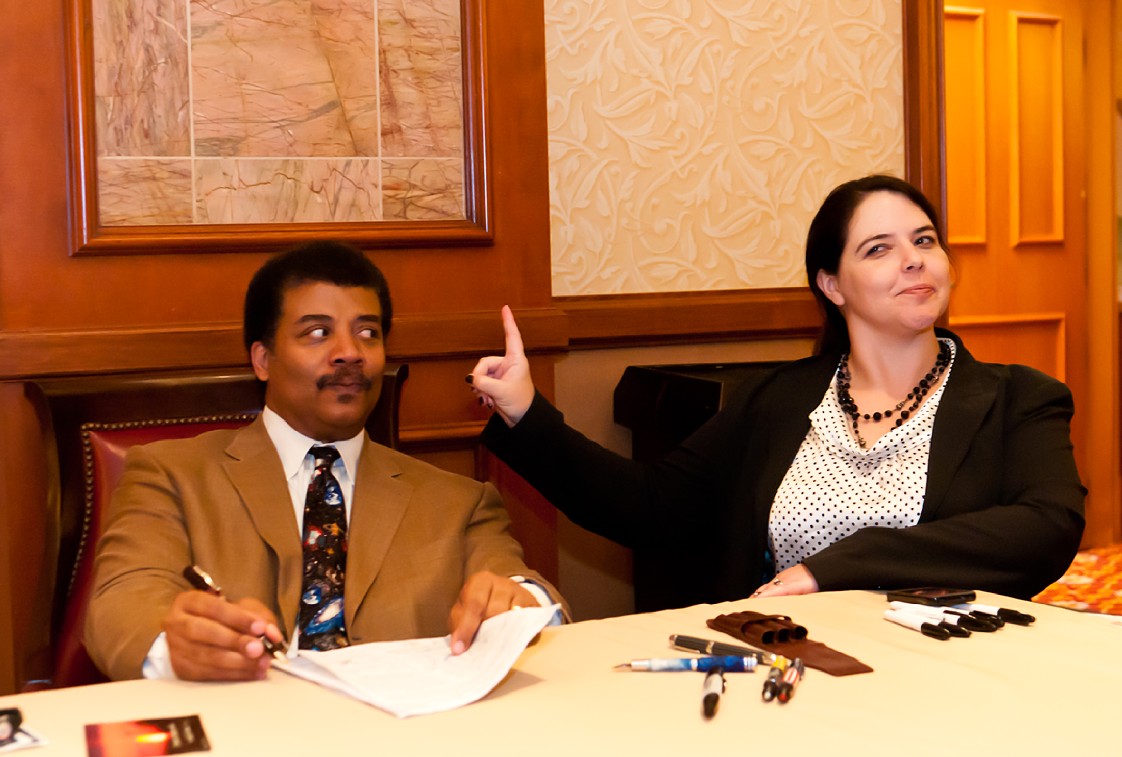 What do you think about sci-fi made about forty, fifty years ago? Some of it made good prediction, some of it not.
What I really love is going back and looking at fiction that was written prior to 1962. In 1962 Mariner 2 space craft flew past Venus and prior to that we didn’t know the Venus was so hot that we can’t really land a spacecraft there because it would melt. In 1962 we learnt that and all of the science-fiction writers who’ve been describing Venus as tropical paradise where rained all the time realized they were very wrong. It rained all the time but hydrochloric acid that will kill you. And when I go back and read all this fiction, like Martian Chronicles by Ray Bradbury and so many others, they had the amazing way at looking at the Mars that supports life and Venus that support civilization and it’s beautiful. And I love to see how they tried to confine things to science and they didn’t have the data. And it’s beautiful to watch the evolution of science-fiction as our science has changed.

What about science in comic books?
So science-fiction comes in so many different forms. There are comic books, graphic novels, movies, regular books, television shows. And I love all of it. Sometimes I even love it when it’s really bad fiction because it’s always interesting to see what has inspired different people. One of my favorite things to do as a scientist is to find authors or artists and say: „Hey, there’s this new discovery, let’s work together because I want you to use our new discoveries in your new fiction and see what we can create together“. And this is something that I got to do with graphic anthologies Free Wifi on Mars, you can find it at freewifionmars.org. I worked with another scientist, Bill Keel, and we found four amazing authors and graphical artists and we talked to them about how light can actually echo clouds of material in between galaxies and that light is making these weird ghostly shapes that reflect. And it’s quite beautiful and scary all at once. And we wanted to see what authors can do with that. If you want to find out, you have to go to website.

I have to ask – what’s your favourite sci-fi TV show?
Oh, my favorite sci-fi TV show is something, I think, that changes all the time. My favorite sci-fi show but not for its science is probably Firefly with Babylon 5 very close behind. In terms of getting the science really right Battlestar Galactica, the new version really did some good stuff that was completely right and so has Farscape. Farscape also did some things wrong but it’s also fun with puppets.