Robin Veith: Mad Men doesn’t give the audience what they want 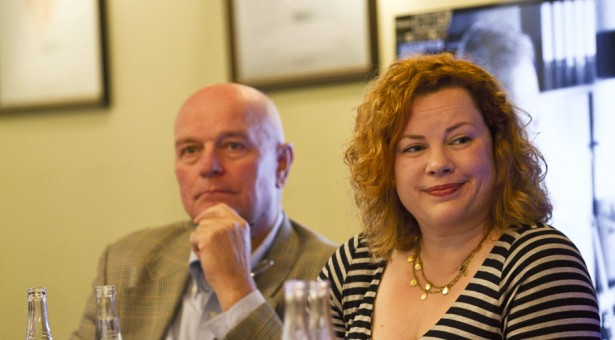 Mad Men (2007–2015), winning five Emmy Awards and four Golden Globes, is one of the most successful TV shows. Because the second half of Mad Men’s final season premieres these days (from April 5, 2015), we believe it is an appropriate time to finally publish an interview with Robin Veith, who spent three years with Mad Men. Robin was not only the writer/supervising producer for Mad Men, she also worked on such shows as Law & Order, True Blood, Lights Out, Believe. Last year, Robin was a member of an international jury for Czech and Slovak TV formats at the 27th Finále Festival, which took place from April 27 to May 3, 2014 in Pilsen. She was also present at the master class (organized by Midpoint) at which the screenwriter and screenplay consultant Mary Kate O Flanagan analyzed an episode of the second season of Mad Men called New Girl. The audience had a chance to ask Robin questions (four of those questions are included at the beginning of this interview). The next day she found a small gap in her busy schedule, and so we had a chance to talk. We discussed her role in the process of creating Mad Men, the character of Peggy Olson (played by Elisabeth Moss), TV censorship, and other topics.

Did you know from the beginning what the season is going to be about?
Yes, absolutely. During the vacation time Matt Veiner would work out in his mind what the message, the theme of the next season is going to be; what it is, that we want to say. So we always knew exactly what we were doing. We would write a season even while on vacation, because vacation doesn’t really exist when you’re working on Mad Men. They always give you reading assignments; for example, we had to do a lot of research on history, because that’s what Mad Men is true to. When the writers came back after the two months of vacation, Matt would tell us what it is he wants to tell the audience, and very often he would also have in mind an outline of the story of each character. So after he figured out what the beginning, the end and a couple of points in between are going to be about, the writers arched in-between. And that’s how you use a writers‘ room; you stuff it with brilliant people and let them help you build the story with you.

How does one select the right people for the writers‘ room?
It’s a talent to put together a great writers‘ room. When you’re looking for a job in one of these rooms you have to first provide them with a sample script that you’ve written. Then they’ll send it to the show runner and to the head writer to read. And if they like what you’ve written, you’ll be called for an interview. The interview is like a first date – they already know you can write the show, but you still have to spend so much time with these people talking and getting to know one another. They’re looking at you asking themselves: “Can I spend 9 hours a day 5 days a week with this person in front of me talking all the time?” In Los Angeles there are plenty of very talented writers. But to find six writers who will cooperate and work together, balance each other and won’t end up hating each other – that’s a very difficult thing to do. But when the right people are put together, you’ll never want to leave.

Does audience feedback, preferences and ratings actually influence which characters stay on the show, get more space… Or do you have complete freedom over that?
It depends on the show. Law and Order, for instance, is very much like this. If the network finds out that the audience loves this or that character, they won’t let us get rid of them, even if we feel there is no more story for them. They are breaking up ratings, so we are not allowed to lose them. In Mad Men we worked with the principle of not giving the audience what they want. We had a very teasing relationship with our audience, because we knew that if we gave the audience exactly what they wanted, then it would be done, it would be over. 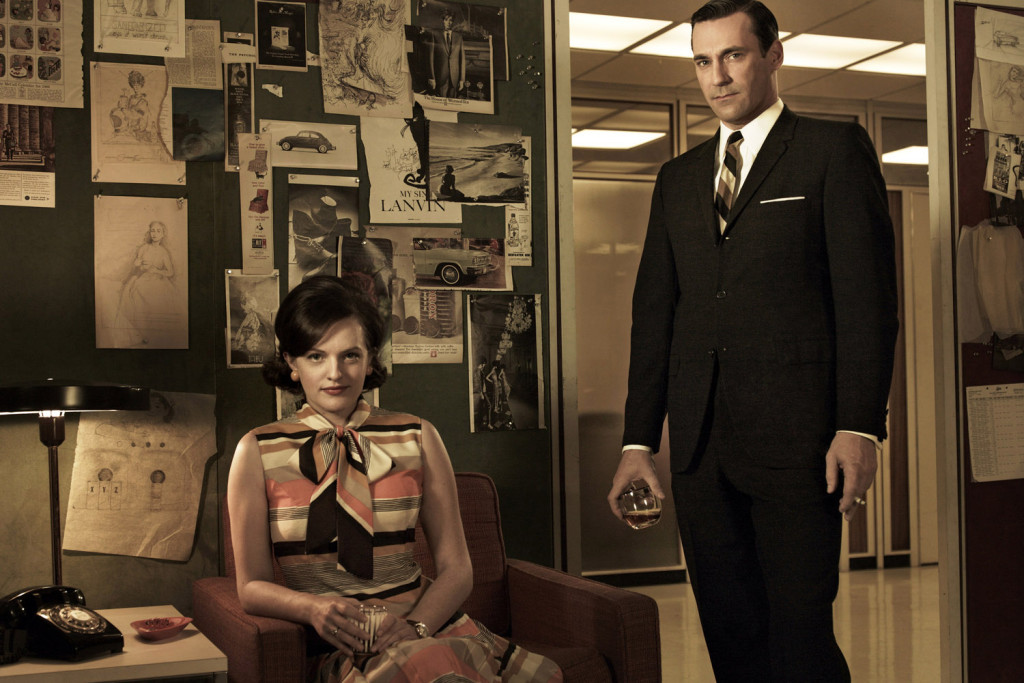 Where did the idea of Peggy’s character come from?
It’s funny because Matt and I were doing interviews with each other and people knew our history – how he hired me as an assistant and then made me a writer. So it’s easy to draw a parallel between Don and Peggy, and me and Matt. In season one, Freddy sees something in Peggy, he brings her over to Don and tells him she could write. So when we did the interviews, Matt’s joke went like this: “Everybody thinks I’m Don and Robin is Peggy, but really I’m Peggy and Robin is Freddy.” Matt meant it as a joke, but there is a lot of Matt Weiner in Peggy; just like Peggy, Matt desperately wants to become better, he believes in himself and he is willing to fight for himself. And I think that’s why a lot of people relate to Peggy. She is the hero on the show. She never stops learning and changing. The rest of the characters think they have it all figured out. Peggy is different; she is the only one who openly knows and admits she doesn’t have it all figured out, and so she’s easier to relate to. Through Peggy, the audience can look at the insane world that she’s in.

The TV of the 60s seems to be – metaphorically speaking – one of the characters of the show. Did you have an advisor who helped you choose TV programs and shows from the 1960s?
As writers we did a lot of research – we would go to the library to read newspapers from that time, and we would look up the TV schedules to see which shows were playing. We knew what stories we wanted to tell in Mad Men, so we would try to find things that were thematically similar. But we also had bunch of university students as interns in our office, because we didn’t have time to watch all the TV programs. They were chosen very carefully. We would just read a sentence or two from the summary of this and that program, and then we would tell the kids to watch it and tell us if it was any good. (laughs) But yeah, they were chosen very carefully and researched in depth. Everything on that show is very carefully calculated and everything is done with a reason. 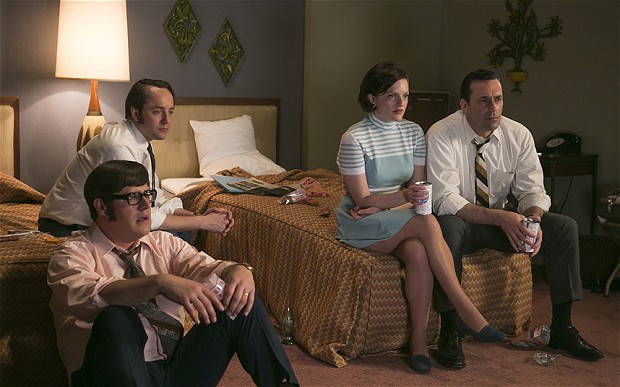 What about the censorship regulations – did you have to change anything because of them?
When you’re going in, you usually know what your limitations are going to be. For instance, because Mad Men is showed on what we call „the basic cable“ we’re not free to present nudity. They told us at the very beginning that we could say the swear word „shit“ only once in an episode. Knowing that, we were very careful about when we got to use it. But you know, there are shows such as The Sopranos or True Blood and these are on HBO, on a paid cable, so they can have nudity and they can curse all they want. It’s built within the system of American television. If you are on a network TV, you are very limited in what you can do. If you are on the other end – on HBO, Showtime or Cinemax – you can do whatever you want. It’s a challenge we all have to deal with as writers – doing the most you can within the set boundaries, while bearing in mind all the limitations. (laughs)

You were a writer of the film Quad (starring Aaron Paul and Jeff Daniels). Does it have a premiere date yet?
No. Things got lost in post-production and editing, so it’s sort of in limbo right now; it hasn’t been finished yet. This happens in film more than in TV, and I think that’s why I prefer television to film. In television, a firm date is set and the show has to be finished before then, whereas films can go on for years without being finished.

True. On the other hand, there are many great series, such as, for example Twin Peaks, that end one way, blowing you away, and then you find out they were meant to continue. Or you find out that one of the actors didn’t want to continue and it changed the whole storyline of the series…
The unfortunate thing about a TV show is that you rarely know for certain when it’s going to end. It’s a rare joy that a writer gets to actually conclude their show the way they wanted – for instance the writers of The Sopranos and Breaking Bad knew well in advance when it was going to end, so they got to plan their story to fill it.

But then again there are series like Dexter that start off as brilliant shows but then they just go on and on… until they end up more like a family drama…
The hard part about television is that if the producer wants the show to go on, you’ve got to keep producing the story. You have to find a new way to tell it, while staying true to your characters and everything else. To get back to Dexter – I admire those people. They worked so hard with the premise a lot of people couldn’t make last more than two seasons. But they did it. (laughs)
It’s also extremely difficult to produce an ending that will make everyone happy. As a writer, you have to be true to your God and to yourself; to how you feel your story should end. Just roll the dice and know some people are going to be unhappy about it. For instance Lost had a very divisive ending. There are people who absolutely hated it and who were so angry about it; and then you talk to others who think it couldn’t end any other way and they loved it. I think this is also a mark of good writing; if you end up your show in a provocative way, you make sure people will continue talking about it well after it’s over.

I would like to thank Jana Jedličková for her comments and suggestions.