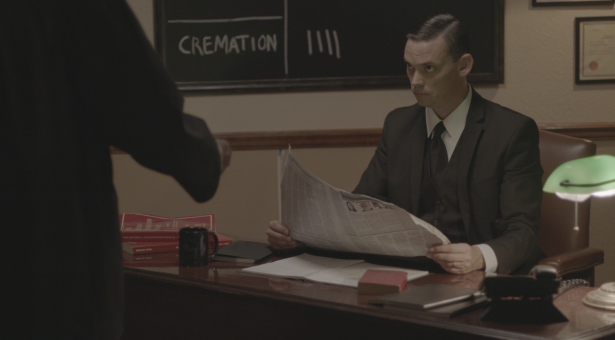 Alex Gomez chose Alena Čadová‚s short script Knock, Knock to film a grotesque horror movie. The shooting in Miami was finished in May this year. The final $ 4500 are required for final postproduction.

Alena Čadová has been scoring for some years with her screenplays at film festivals, and now finally a director noticed her work too.  A short grotesque horror film about a mortician who experiences a very uneasy night shift, was filmed at a real funeral home. Starring Joshua Ritter and Fedor Steer, who is best known to the audience as William Hill of The Haunting of Hill House. The shooting of the low-budget horror has so far swallowed $ 10,000. For the final postproduction, the last $ 4,500 is needed to be raised in a crowdfund campaign. All movie fans can support the project here.

Čadová wrote Knock, Knock in 2015 and has won some awards with this script. With no contacts in the film world, nor a film school ever attanded, she continued in her writing in silence and waited for her first film. Gomez found her work on Inktip.com, a script-publishing site. „It’s a dream collaboration with incredibly talented people. Gomez contacted me for the first time in October 2018. If someone told me then that thanks to him Knock, Knock would be finally filmed, with such a remarkable cast on top of that, I wouldn’t have believed it a whit.“

The movie campaign will run until 5th October 2019. We keep our fingers crossed for Gomez, Čadová  and the rest of the team so that their American-Czech horror movie can see the light of day as soon as possible.