Zde se nacházíte: 25fps » Aktuality » Samantha Fuller, daughter of a famous American director, will be the main guest of the Noir Film Festival

Samantha Fuller, daughter of a famous American director, will be the main guest of the Noir Film Festival 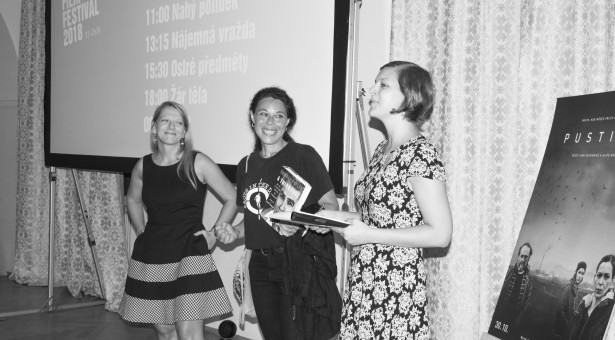 In exactly four weeks, on Wednesday 17 August, the 10th anniversary edition of the Noir Film Festival will begin. During the five days of the festival, visitors can look forward to more than five dozen screenings of classic American noirs from the 1940s and 1950s, as well as films of Spanish and Czechoslovak/Czech provenance. The main guest at Český Šternberk Castle will be the American director Samantha Fuller, daughter of the famous filmmaker Samuel Fuller.

Samantha Fuller as a guest of the Noir Film Festival

In 2013, Samantha Fuller (*1975) made a documentary about her father Samuel Fuller (1912–1997), the enfant terrible of American cinema. A Fuller Life, an adaptation of the filmmaker’s autobiography, was screened at the 2018 Noir Film Festival with the director’s personal participation as part of a select retrospective of Fuller’s work. Samantha Fuller returns to the festival after four years to personally introduce her father’s film Underworld U.S.A. (1961), which will be screened as part of the Special Screenings. Similarly, Jean-Luc Godard’s Crazy Pete (Pierrot le fou, 1965), where Samuel Fuller appeared in a famous cameo, is here to utter the iconic line, „Film is like a battleground,“ in response to Jean Paul Belmondo’s character asking “what is film?”. “It’s love. Hate. Action. Violence. Death. In one word: emotions.“

Like every year, the festival’s programmers Jana Bébarová and Milan Hain have included a section dedicated to the non-American film noir genre. After last year’s excursion to Bollywood, this year they are returning to Europe again and will present the forms of noir in Spanish filmography in five selected films. Alongside the famous Death of a Cyclist (Muerte de un ciclista, 1955), directed by Juan Antonio Bardem, about a loving couple brought to ruin by a tragic accident, lesser-known films such as Ditirambo (1969) will be screened in the Czech Republic, in which the film’s director Gonzalo Suárez plays the title protagonist, a journalist who is hired by a wealthy widow to exact revenge on her late husband’s former lover.

The character of a disgraced, unsuccessful writer who gets caught in the net of his own invention appears in José Antonio Nieves Conde’s The Red Fish (Los peces rojos, 1955), while Express Train from Andalucía (El expreso de Andalucía, 1956), directed by Francisco Rovira Beleta, is a prime example of a thrilling heist film. The selection will be rounded off by The Glass Eye (El ojo de cristal, 1956), which Antonio Santillán directed as an adaptation of a novel by the American hard-boiled literature writer Cornel Woolrich, whose work the Noir Film Festival presented in the selection section back in 2019.

Before the 10th edition of the festival starts at Český Šternberk Castle, the festival team will go to the place where the festival was first held in 2013– Kokořín Castle. On Tuesday, 16 August, a bus will be dispatched from Český Šternberk with a stop in Prague to Kokořín, where in the evening the atmospheric courtyard will be used to screen a characteristic film – Detour (1945) by Edgar G. Ulmer, whose films are part of this year’s program. The Facebook event can be found here.

The accompanying program this year will include two lectures. In the first of them, festival dramaturge Milan Hain will present the work of Hollywood producer David O. Selznick (1902–1965), about whom he wrote a monograph last year entitled In the Tradition of Quality and Prestige: David O. Selznick and the Production of Stars in Hollywood in the 1940s and 1950s. Graphic designer Alan Záruba will then discuss the design of noir posters in a second lecture.

Among the guests who will visit Český Šternberk Castle will be festival regular Jan Hřebejk, who together with screenwriter Miro Šifra will present the TV miniseries Rédl (2018), and director and producer Michal Samir, who will present the miniseries Iveta, which premiered this year on VOYO. This year, actresses Daniela Kolářová, Ivana Chýlková and Judit Bárdos will visit the festival as patrons. Other patrons will be actors Martin Finger, who will appear in the accompanying program of the performance by the Theatre in Řeznická False Note, and Tomáš Hanák, who is the regular author of the festival jingle for Radio 1.

You can find the complete program here.
It is already possible to book and purchase individual tickets for all screenings at
vstupenky@noirfilmfestival.cz