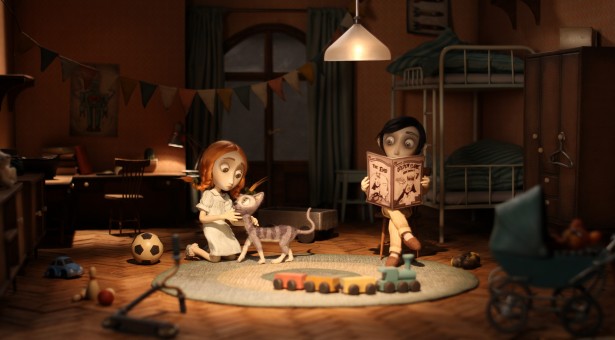 The sixth edition of VAF Třeboň, a key industry meeting for animation professionals took place in Třeboň, Czech Republic on May 1-3, 2018. In addition to the two traditional categories of Pitching Competition of Short Films and Series/TV Specials, there was a brand new element at the event – the historically first Pitching Competition of Feature Films.

The VAF Třeboň programme traditionally involves a pitching competition for the categories of short films and series/TV specials in development. This year’s novelty is the competition of feature films that are also still in the development stage, organized together with Anifilm and CEE Animation. The audience was presented with six projects from the Eastern and Central European region. The international jury was made up of respected film experts Marc Bonny (Gebeka Films), Moe Honan (Moetion Films), Manuela Lumb (independent producer), Manon Messiant (Sacrebleu Productions), Barbara Slade (lector and writer) and Dario van Vree (Studio Pupil).

The winner is the co-production feature film Of Unwanted Things and People. The project is the joint work of a team of successful producers that includes Martin Vandas (MAUR film, CZ), Juraj Krasnohorský (Artichoke, SK), Kolja Saksida (ZVVIKS, Sl) and Wojtek Leszczynski (WJT, PL), which confirms the strength of cooperation between CEE countries. The direction was in the hands of four successful authors – David Súkup (CZ), Ivana Laučíková (SK), Leon Vidmar (SI), and Agata Gorządek (PL). “We feel the project has a high level of production and is ready to be shared at Cartoon Movie. We also believe the producers can bring the project to the next level by focusing on the development of the feature film genre and working with their future partners,” the jury explained. The winning project advances directly to the prestigious Cartoon Movie 2019. The jury’s decision has been confirmed by the voice of the audience as well, as the project Of Unwanted Things and People also won the Nespresso Audience Award.

The jury has also decided to award a Special Mention in the same category to the first Macedonian animated feature film John Vardar vs the Galaxy (d. Goce Cvetanovski, p. Alan Castillo) “We think this a great project which came close as it displays with a strong vision for where they wish to take it. The film has a great lead character with a strong feature-story potential and we have no doubt they will develop the artistic and story elements further. We encourage them to do so in the next steps towards bringing it to international markets,“ a representative of the jury explained regarding their decision.

The winner of the Series / TV Specials category was the Serbian animated series Rabbit From a Tin Hat (dir. Ivan Knežević, p. Ivan Bereš).  The jury has said about its choice: “This is a very original fresh project. We felt also that the timing is good for this type of subject to have an opportunity to enter the market and to reach a wider audience especially in our current world where fake news is unfortunately becoming a normal part of the content we are fed and where we need to become more discerning and aware of what is authentic and what is sent to manipulate us.“ The winner is leaving with a prize of 2,000 EUR and direct access to Cartoon Forum 2018.  Another project which can now prepare for the prestigious European meeting of film professionals Cartoon Forum is the 25-minute-long TV special Noah’s Tree, dir. Péter Vácz, p. Gábor Osváth (Hungary). The jury has awarded the project a Special Mention stating: “This project was very convincing from a point of view of the strong personal authentic voice in the story. We also felt that the artistic elements were very beautiful and already well developed.”

From a competition of 11 projects, the international jury has selected the winning Serbian short film – Floating, dir. Jelena Milunovic, p. Milos Ivanovic. “An original project that touches a difficult and universal topic with a compassionate and humorous approach. Its visually strong concept uses the possibilities of animation to the full extent,” the jury explained. The team is leaving with financial support of 2,000 EUR. A Special Mention has been awarded to the Polish project I Come Undone (dir. Piotr Chmielewski, p. Przemek Stepien). The jury explained their decision: “A fresh content-driven concept that is based on changing perspective. Promising animation and sound design, and a charming pitch with a funny and honest style.” The same project has also gained the Post Production Award offered by Polish Playade Sound Studio. The prize, which is worth 1,000 EUR, will cover the audio post-production including studio and sound engineer for five days. Tim Leborgne, project leader of Animation Sans Frontieres followed the pitches in both categories and chose Polish director Piotr Chmielewski who received a scholarship in amount of 1,500 EUR.

This year’s VAF organisers placed great emphasis on networking. Getting to know each other and establishing links among film professionals is turning out to be essential for the CEE region. Within three days, more than 170 meetings took place in which authors, producers, broadcasters, distributors, and representatives of national film funds all had a chance to meet at one table.

Sabine Minniti (Creative Europe MEDIA) accepted the invitation to Třeboň as well and led an interactive workshop here for participants and future TV programming applicants. She encouraged producers from the CEE region not to be afraid to apply for support while emphasising the importance of co-production collaboration.  As a successful case study, she pointed out the TV series The Websters by Slovak producer Katarina Kerekesová, the only project from the CEE region

which has received support. Creative Europe MEDIA has been expressing its support of the CEE region animation industry in the long term – recently by providing venues for prestigious MIFA Annecy 2018.

Find out more about the event VAF Třeboň at www.visegradanimation.com.