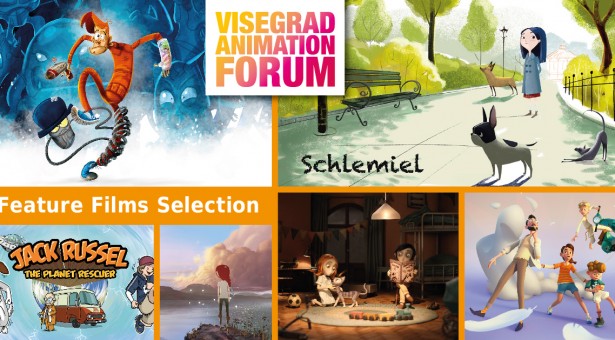 The sixth year of the international Visegrad Animation Forum for film professionals will take place on 1st – 3rd May. As a tradition, it will be centred on a pitching competition of animated projects now in development in two categories – short films and series / TV specials. This year’s novelty is a pitching competition of upcoming animated feature films. It is organised by the Visegrad Animation Forum in cooperation with the Anifilm Festival and the newly established CEE Animation platform. This will be the first time in history that the region of Central and Eastern Europe will see a presentation of feature films that are still in development.

Feature film is a distinguished discipline in animation. Such production ventures require courage, patience, and a great deal of energy. That’s why animated feature films are often eagerly awaited. Last year’s animation sensation – again from the CEE region – was Loving Vincent (dir. Dorota Kobiela, Hugh Welchman, POL), which has circled the world, broken box office records and collected a number of prestigious awards – including the European Film Award or a Golden Globe nomination. At the beginning of 2018, Jan Švankmajer, a strong name in Czech animation, introduced his latest feature, Insect.

Among this year’s closely watched premieres by leading Central and Eastern European filmmakers are Another Day of Life (dir. Raúl de la Fuente, ES, Damian Nenow, POL) – an adaptation of the Angola civil war report, The Fantastic Voyage of Marona – another film by the pioneer of animated features Ancy Damian (RO) about unconditional dog love or the adventures of a young boy who shrank to the size of an insect called Captain Morten and the Spider Queen (dir. Kaspar Jancis, EE).

For the pilot year, projects were selected by experienced producers and national co-ordinators of the Visegrad Animation Forum. They know the film production of their countries in great detail, a fact which has enabled them to choose the most suitable representatives for this presentation.

The first one of the six competition entries is the Polish family adventure story of a Portuguese girl Fatima and the Secret Treasure, presented by one of the directors Barter Kik together with the producer Urszula Łuczak. Hungarian animation is represented by the film Helka – dir. László Nyikos. The Czech director Ondřej Pecha is presenting his feature film in progress Jack Russel the Planet Saviour (producer Miloslav Šmídmajer), inspired by the work of the famous artist Vladimír Jiránek. This year’s selection will also be enriched by the first ever Macedonian animated feature film – the fantasy John Vardar vs. the Galaxy (dir.

Goce Cvetanovski, producer Alan Castillo). The successful co-production duo of Juraj Krasnohorsky and Martin Vandas will present a co-production short story film Of Unwanted Things and People, based on a book by Czech writer Arnošt Goldflam. The group of six is completed by the Polish Schlemiel (producer Włodzimierz Matuszewski), a story of courage and friendship in difficult times.

„Film makers and original projects from Central and Eastern Europe attract and enchant the whole world. We are delighted that in the past six years the Visegrad Animation Forum has become the heart of animation in the region. These two facts have enabled us to conclude a unique partnership agreement with the prestigious Cartoon Movie, a pitching and co-production forum for feature-length animated films,“ Anna Vášová, head of the VAF feature film section, explains.

Thus, the winning animated feature project will then proceed directly to Cartoon Movie 2019 (Bordeaux, FR), where it will compete with 60 other projects in front of more than 850 cinema professionals (distributors, sales agents, investors) from 40 countries and have a chance to gain key partners for the film. The Třeboň audience will choose a winner of the special Nespresso award from among the six competitors.

The competition will take place at the Puppet Theatre in Třeboň at 3.15 p.m. on the 2nd May during the Anifilm Festival, which has decided to transform the Work in Progress programme section into a more formal pitching of feature films. „With the growing interest in feature-length animated films, we have decided in Anifilm to join forces with the Visegrad Animation Forum. We strongly hope that this format will prove to be the right way and encourage the encounters of professionals at the festival, as well as the proliferation of animated feature production in Central Europe,“ the director of the Anifilm festival Tomáš Rychecký concluded.

There will also be a ceremonial presentation by the Visegrad Animation Forum of another year of VAF New Talents – a selection of short films created by promising young authors from the Central and Eastern European region.

Find out more about the event VAF Třeboň here.