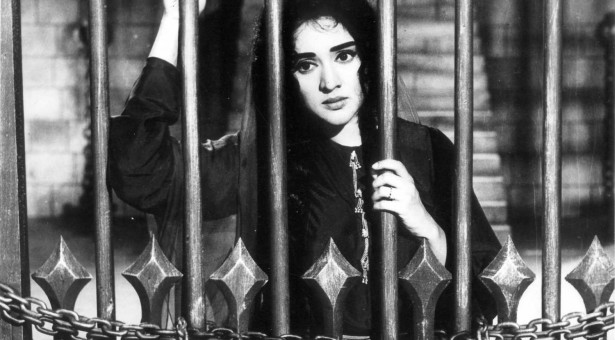 Exactly one week from today, on Wednesday 18 August, the halls of Český Šternberk Castle will open to visitors of Noir Film Festival. The first screening of the 9th edition of the event, which regularly brings a few days of chilling film dramas, detective stories and thrillers every August, will begin at 4 pm. Until Sunday, 22 August, Noir Film Festival will offer five dozen screenings of films from the USA, Czechoslovakia and India.

„This year’s edition will be marked by socially engaged films, starting with five Hollywood films from the late 1940s and early 1950s from the main program section Noir without Prejudice, reflecting the pressing issues of racism and xenophobia that plague American society,“ says programmer Jana Bébarová and adds: „The plight of war veterans will be viewed from several angles in the program section Amnesiac Noir, while the bigamy, coping with physical disabilities, the plight of unwed single mothers or the empty lives of frustrated housewives in a seemingly idyllic American suburb, the dramas made at the same time by the actress Ida Lupino, whose directorial work will be the subject of a retrospective section, will be told for a change. “

In addition to Ida Lupino, the festival will also celebrate the acting legacy of Hollywood stars Bette Davis (Beyond the Forest) and Victor Mature (I Wake Up Screaming). It will also honor the memory of Czech actress Hana Maciuchová, who passed away this year, with screenings of two TV mysteries (The Man in the Net, Death on the Hour) and evenings of remembrance.

The festival’s programming concept is to present film noir in its various forms across time and geographic space. This year, the neo-noir revision of the popular genre will be made present in four films directed by the Coen brothers, which reshape noir conventions with playful unpredictability. Audiences will be able to see their „miraculous“ debut Blood Simple (1984), the conversational gangster Miller’s Crossing (1990), which stands in the shadow of the cult Fargo (1996), and the Cannes award-winning, visually lavish The Man Who Wasn’t There (2001).

„Throw away your prejudices and come and see that dance and noir go together,“ says programmer Milan Hain about the Bollywood Noir section. „Indian popular cinema has never been as ideologically subversive as American noir, but even so, Bollywood films of the classic period cover a multitude of genre positions, and among the titles from the 1950s and 60s that will be the focus of our selection, many fabrics with crime, gothic or horror themes can be found. The setting of a medieval castle, for example, perfectly underlines the intense ghostly atmosphere of The Fog (Kohraa), which is an adaptation of Daphne du Maurier’s novel The Dead and the Living, whose more famous film version by Alfred Hitchcock we screened two years ago,“ adds Hain.

There will also be Czechoslovak titles with noir undertones, such as the psychological drama Vertigo (Závrať, 1962) about the strange and disturbing attraction between a young girl and an older man, which is the result of a creative collaboration between screenwriter Jan Procházka and director Karel Kachyňa. The film will be released in cooperation with Magic Box in a special festival DVD edition. During the festival it will be available for 130 CZK (after the festival for 159 CZK). The disc is also equipped with English subtitles and Czech subtitles for the hearing impaired.

On Thursday, 19 August, before the evening screening in the castle courtyard, the Blu-ray edition of No Way Out (1950) will be presented at Český Šternberk, released by Art4Media in cooperation with the festival (in the past, the company released Hitchocck’s Rebecca and Mackendrick’s Sweet Smell of Success on Blu-ray). „The film, about a young black doctor (debuting Sidney Poitier) who is wrongly accused of murder by a racist criminal, is the best example of the socially conscious filmmaking championed by Darryl F. Zanuck at Twentieth Century-Fox,“ says Milan Hain, who wrote the accompanying study for the booklet.

Music performances and the Night of Film Promises

The program will be enriched by the silent, horror film The Arrival from the Darkness (1921) directed by Jan S. Kolár, an important personality of Czechoslovak silent cinema, which was partly filmed in the castle of Český Šternberk. Live music accompaniment will be provided by the renowned cellist Terezie Kovalová. The dreamy melodies of melancholic songs with ambient positions of singer Sára Vondrášková aka Never Sol will be the intro of the first two evening screenings, while the remaining two will feature jazz and swing improvisations performed by Aneta Kováčová.

Before Friday’s open-air screening of The Enforcer (1951) starring Humphrey Bogart, the winning film of Night of Film Promises, which has been organized by TV Nova for 14 years, will be screened in the castle courtyard. In cooperation with Noir Film Festival, this year it announced a special category „Make a Noir Film“, in which Rudolf Vodička from the Theatre Faculty of the Janáček Academy of Music and Performing Arts in Brno won with his short film Sleepless Night (or Norma is not Bates).

A week before the start of Noir Film Festival, the traditional animated festival trailer from the creative duo of Marie Urbánková and Matouš Vyhnánek is unveiled.

The complete program is available on the website https://www.noirfilmfestival.cz/en/. Information about tickets and festival passes can be found here.