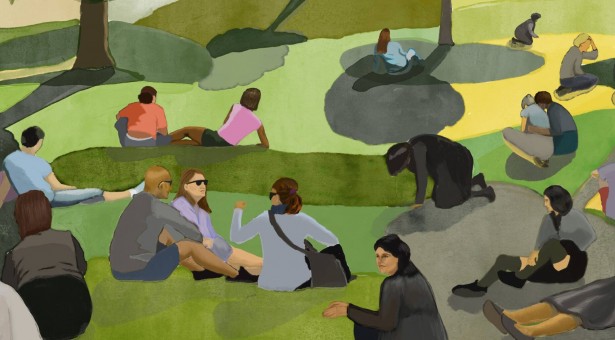 In solidarity with all those who have lost or been forced to fee their homes because of war, the Feminist Film Festival „Filma“ dedicates a single program, „When Trees Blossom at Home Again,“ to the topic of migration in armed confict. The festival will take place online from November 24 to December 9.

Our feminist collective created the „Filma“ Festival as a shared platform for films that align with the principles of intersectional feminism, anti-racism, anti-colonialism, inclusion, and the culture of consent.

One of the main principles of the festival is accessibility. Therefore, watching films is free and not limited geographically. All films have extended Ukrainian (SDH) and English subtitles. For the films Remember the smell of Mariupol, The Turtle’s Rage and I Swam Enguri, audio description in Ukrainian will be available. For the two weeks of the festival, the films will be universally available on the festival website. No prior registration is required.

The selection of films includes eight works by authors from different countries and contexts. They depict various experiences of migration and living through wars and armed conflict, but the pain of losing one’s home is always the same.

„Filma“ 2022 will be held in cooperation with Freeflmers and with the support of Rosa Luxemburg Stiftung in Ukraine, Movies that Matter, and House of Europe. The festival program is on the second page of this document.

Director: Zoya Laktionova, Ukraine
Full-scale war and forced evacuation leave the director between two worlds: in one, the city of her childhood and its people are destroyed, in the other, nothing happens, but the landscapes around her begin to resemble home.

Director: Sashko Protyah, Ukraine
This flm tells the story of volunteers evacuating people from Mariupol, besieged by Russian troops, to Zaporizhzhia in the spring of 2022.

Newsreel 63 – The Train of Shadows

Author: Newsreel Front (Nika Autor), Slovenia
Newsreel 63 tries to position and understand a particular image – a snippet of video taken with a mobile phone on the once-famous Belgrade – Ljubljana rail-line, where refugees now travel not in couchettes but between the wheels of the train.

Directors: Amel Alzakout, Khaled Abdulwahed, Germany
I lie on my back, under the surface of the water. The sea is purple. I feel the warmth with every pore of my body. I’m not afraid anymore.

The Landscape of Fear

Director: Kasia Hertz, Poland
This flm tries to convey a memory of the events on the Polish-Belarusian border during the humanitarian crisis from the point of view of activists and local residents involved in helping people feeing through the forest to the European Union.

Director: Pary El-Qalqili, Germany
A tragicomedy that tells of the trauma of displacement through a confrontation between a father and daughter.

Director: Anuna Bukia, Georgia
A young woman tries to return to the home she was forced to fee at the age of four. But the only way to enter the occupied area is to cross the border in secret.

Director: Anirban Dutta, India
With the onset of armed militancy in the valley of Kashmir in 1990, about 350,000 to 400,000 Kashmiri Pandits were driven out by force. Kirti was 20 at the time, and her family were among them.