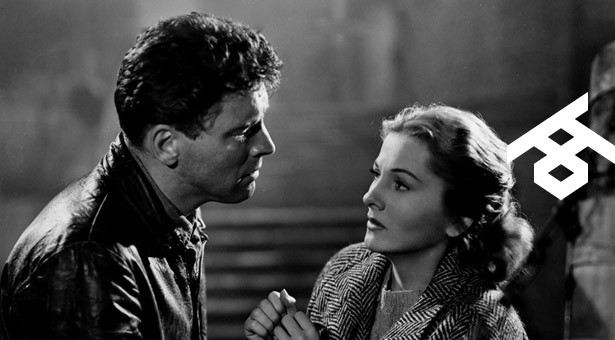 If we were to seek a film phenomenon that doesn’t cease to be popular both with viewers and film researchers, we would undoubtedly find film noir. Whilst the audience is drawn chiefly by its charismatic and enigmatic protagonists and distinctive visual style, the experts tend to analyse the elusiveness of its periodization and essence. Year after year, we can therefore see new books being published striving to bring some light into these areas (the most recent one being William Park’s book What is Film Noir?). Robert Miklitsch hyperbolically compared the effort to unravel such fleeting elusive phenomenon to Hitchcock’s Vertigo: Scottie symbolizes the film critic while film noir is Madeleine, the object of beauty, with whom he falls madly and deeply in love but who turns out to be a mere illusion.1 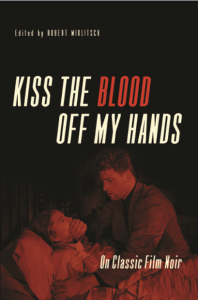 With the ambition to answer the question that returns like a boomerang – “what makes the noir a noir?”, the book Kiss the Blood Off My Hands, published last year by the University of Illinois Press in Chicago, gives up without a fight. Rather than defining film noir, it aspires to redefine it. The anthology of texts under the editorial patronage of Robert Miklitsch concentrates exclusively on the classical era of the 40s and 50s (the editor himself is represented by a study that reflects the attempts for a periodization of the noir canon), which is, among the publications on film noir, quite rare.2 The book’s greatest contribution is not only the revisionist perspective from which the given phenomenon is viewed, but primarily the reflection of yet unheeded topics. This perspective relates directly to the tendency to question the well-established stereotypes on the level of gender roles, to ponder upon the creative input of people, other than solely directors, and last but not least, to point out the overlooked, yet key, formal and thematic aspects.

The rejection of the schematic character perception is a pivotal element of the first two studies focusing on female protagonists in film noir: Philippa Gates, who specialises in gender issues in the genre of criminal film and Julie Grossman who has been inquiring into the concept of femme fatale for a long time now (and among others, she is now preparing a monograph on Ida Lupino). Both authors follow the feministic reading of noir that already escalated by the end of the 70s, when the fundamental book Women in Film Noir (ed. E. Ann Kaplan) was published. This reading rejected viewing film noir from the masculine perspective. Philippa Gates challenges the clear-cut division of female characters into the insidious, seductive femme fatale and the innocent protective housewife by the identification of a third, alternative type that combines the characteristics of the first two types. Her main topic of interest is the character of an amateur female detective whose investigation activities result from her personal incentives. The author elaborated her propositions on such films as Undercurrent, I Wake Up Screaming or The Second Woman. She summarised all her thorough research in a well arranged listing of twenty titles from which she specified more closely the female character, her abilities, behaviour and the level of autonomy.

The disturbance of the stereotypical categorisation of male and female characters (private eye vs. femme fatale) is followed up by the afore-mentioned Julie Grossman. She bases her study on the hypothesis of genre hybridisation of film noir that absorbs elements of melodrama. She perceives this hybridization as a purposive strategy of Hollywood studios aiming at the broadest audience possible. Her text is an inspirational reflection on the role of the novels of female writers such as Dorothy Hughes, Vicky Baum and Vera Caspary. The comparison of the authors’ novels and their film adaptations (as for Dorothy Hughes, these are films directed by Nicholas Ray – In a Lonely Place and A Woman’s Secret; concerning Caspary, it is her iconic Laura and her paraphrase, Bedelia) result in fundamental findings about the influence of their work on the forming of the female characters.

Another writer to analyse the Hollywood studios’ support of the rising phenomenon is Andrew Spicer, who refers to Sheri Chinen Biesen and her major finding from the book Blackout: World War II & Origins of Film Noir (2005). In the study, she found out that the American film industry and media recognised the growing film noir trend (called “red meat crime cycle”) long before the French officially brought attention to it, giving it the name it has maintained to this day. Spicer proves the efforts of the Hollywood industry to cash in on the popularity of these films with the work of three significant producers and places their creative contribution on an equal footing with today’s auteur directors. According to Spicer, they contributed to the initiation, or more precisely transformation, of the noir cycle, despite (or maybe exactly because of) the fact that each came from a different background and held different ideology. He views Jerry Wald, who is being associated with the highly centralised studio Warner Bros., as a pragmatist. Adrian Scott, employed by the studio RKO notorious for its fragmentation and instability, is marked down as an idealist. Finally, the pioneer of independent production, Mark Hellinger, comes down as a realist in Spicer’s eyes. He supports their diverse approaches to production with case studies of Mildred Pierce (Wald), Farewell, My Lovely and Crossfire (Scott) and The Naked City (Hellinger).

Another author who wrote about important contributions of other personalities connected with film noir is Robert Murphy. In his capacity of an expert on European, or more precisely British noir, he points out the contribution of four directors affected by McCarthy’s witch-hunts to contemporary cinema of Great Britain, where they found refuge. Murphy grippingly describes the destinies and work of Jules Dassin and Edward Dmytryk, for whom their British production was but a short intermediate stage in their further career, and Cy Endfield and Joseph Losey, who settled down in the British Isles for a considerably longer time.

Another to contribute was Mark Osteen, the author of the recently published Nightmare Alley. Film Noir and the American Dream in which – as Milan Hain wrote in his review available here – Osteen explored “various ways film noirs depicted and in most cases subverted the American dream of happiness, prosperity and upward mobility”. His study published in the anthology Kiss the Blood Off My Hands doesn’t fall far from this topic either. Here, he deals with the 50s sub-genre of the heist film whose concept of team work he understands as a paraphrase of Ford’s model of division of labour seeking risk minimisation and the greatest utilisation of available means. Osteen concludes that such conceived collective (who, on top of that, perceive their work as gameplay) proves unsustainable when transferred to the criminal underground. Firstly the author analyses the films The Asphalt Jungle and Armored Car Robbery, both premiered at the same day (8 June, 1950) and both of which he considers to be initiatory within the sub-genre. He goes on to compare these films with Phil Karlson’s Kansas City Confidential and 5 Against the House, the latter being distinctive for its atypical social placement of thieves (students) and their motivations (anger and boredom). Among other analysed titles are The Killing, Rififi and Odds Against Tomorrow.

Krin Gabard comes to equally interesting findings on the level of style-forming elements – namely sound. As a film music expert he analyses the role of love songs and their performers from the ranks of African-American actors in films Out of the Past and The Blue Gardenia. His colleague, Neil Verma, concerns himself with the neglected topic of contemporary radio culture influence on film noir. Verma points out a close parallel between classical film noir and the golden age of American radio drama, half the production of which comprised of the criminal genre by the end of the 50s. He identifies the drama’s influence on film noir also in the very frequent dramatic act of snooping on the characters, which he believes to be falsely labelled as voyeurism. Vivian Sobchack emphasises another up to now ignored style-forming element – background projection – in her case study of Ulmer’s Detour. In film noir, she believes the background projection to play the same role for space as voiceover does for time.

J. P. Telotte came at the indisputably most surprising revelation. He describes the paradoxical situation of the Walt Disney Studios that based its reputation on fairy tale family stories and yet, in the 40s, produced noir style animated cartoons with Donald Duck where we can trace an obvious reflection of this prominent film trend. Telotte states that in the following ten years the experimentation in animated production was abandoned and a perceptible noir influence only came back with its revision in the 80s and 90s (which he supports with the films Who Framed Roger Rabbit and Cool World).

What makes the book Kiss the Blood Off My Hands a major act in the up to now film noir research is its challenging of numerous canonized aspects of film noir based on clear argumentation and calling attention to a range of other fields that can be investigated. Moreover, thanks to the enthusiastic approach of the authors of individual studies and generally comprehensible topics they pursue, it is gripping even for some laymen who consider film noir to be just a hobby. Therefore, one cannot but sincerely recommend it.

Kiss the Blood Off My Hands